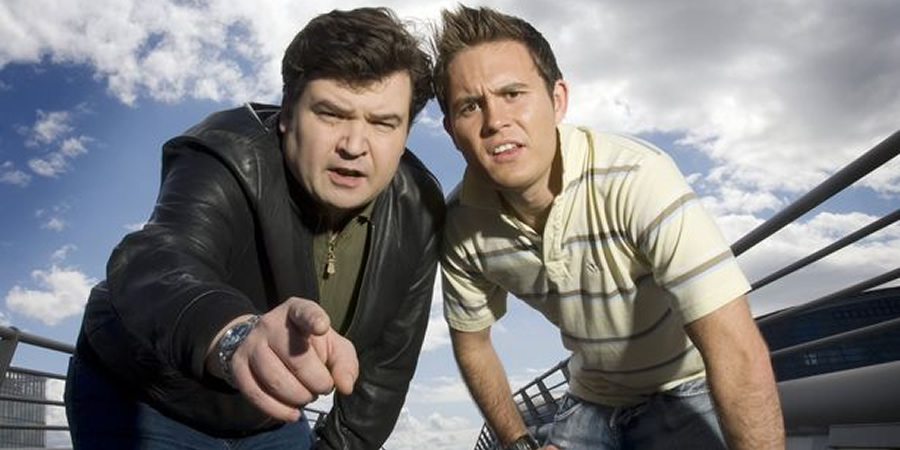 Scottish sitcom about a couple of dodgy market traders

The pilot of this show was excellent so i'm pleased it got a series.

Here's the main jist of it from the Comedy Unit website:

Legit is a brand new sitcom for BBC ONE Scotland. The 6 part series airs on BBC One Scotland from Friday 7th September 2007 at 9.30pm The pilot episode was nominated for this year's Rose D'Or. Legit stars Jordan Young as lovable rogue Danny and Steven McNicoll as family man Fox and is written by Robert Florence and Iain Connell.

Danny and Fox are best friends. They work together, selling dodgy pirate software at markets, play together and, thanks to a caravan in Danny’s mother’s garden, live in each other’s pocket.

However, the one thing they do not share is a sense of responsibility.

Fox is weighed down by it. He wants to be the best father in the world, but his two kids live with their mother and her new boyfriend. If only he could get some money, enough to move out of that ramshackle caravan. Then perhaps he could win back the heart of his ex-girlfriend and become a family man once more.

Danny on the other hand is a free spirit. Still living with his mother, he avoids responsibility like it was an ugly girl looking for a date. An irrepressible “daft boy”, a loveable rogue, Danny reckons his job is to drag Fox out of the dark hole he is stuck in, which normally lands his friend in more trouble than before.

Though rarely strictly “Legit”, Danny and Fox always see themselves as the good guys. They are simply making ends meet the only way they know how in a world of guys who know guys who can get you anything you want.

Every day brings a new scam, a new dilemma, or a new situation that Fox approaches with a sigh of foreboding, and Danny with gusto, certain of that big pay off.

So basically it's kind of like Only Fools and Horses mixed with Still Game.

I think it's only us Scottish viewers get it.

And in the Not Going Out timeslot.

I wish they'd just do the sensible thing and only vary the news programmes rather than whole schedules so wildly!

Any idea if it's repeated?

Thanks very much for pointing this out Jazza - I hadn't noticed it was back. I've added it to our list.

If you do check it out this Friday can you post again here to let us know what you thought?

And ditto what Aaron says: Why the BBC think we should have different schedules I don't know. Waste of a budget. I'm still annoyed at them for how long it took for Still Game to be shown south of the border.

Thanks Jazza, good shout. Prob would have missed this if not for your post

Regarding above comments, FWIW Sky+ channel 971 is BBC1 Scotland.

Regarding above comments, FWIW Sky+ channel 971 is BBC1 Scotland.


Exactly. But the schedule still clashes!

I think I'm going out on Friday. I have Virgin but I have a feeling beacuse it's a regional programme it won't be available on demand. So it will have to be the good old video recorder.

It was just the repeat of the pilot so I can't really say much more about it. The first test is next week when the new episodes begin.

Should have just gone straight into the new episodes IMO.

Has anyone seen any of the new episodes of this comedy yet? I'd be interested to hear your thoughts.

Has anyone seen any of the new episodes of this comedy yet? I'd be interested to hear your thoughts.

Had a few funny moments and felt typical of the resent Scottish comedy in the style of Still Game but not as good the leads are not as strong with less depth but this may improve as the series develops.

So overall not bad but not good either, but one to keep a eye on.

I agree with Barry I think it was alright but not superb.

def room for improvement, a bit soporific for a Friday night.

I'm struggling to buy into the character played by Jordan Young. He played a great role in s03e04 of Still Game 'Big Yin' and I'm afraid I still see him as that guy...

I'm hopeful of an upturn as we get towards the end of the run.

I thought it was pretty good tonight. A lot of laugh out loud moments. I hope the improvement continues.

Never had a chance to watch it properly i kind of did but diudnt concentrate! haha lol!