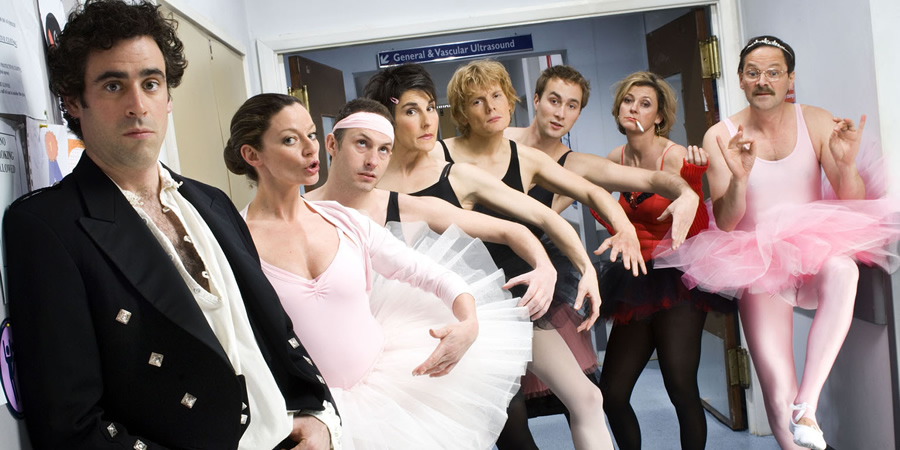 Comedy about the childish and slightly mad staff working in a hospital. Stars include Tamsin Greig, Stephen Mangan and Mark Heap

Am currently re-watching "Green Wing" and it is just brilliant IMHO, virtually everyone in it, but particularly, Stephen Mangan, Tamsin Greig, Mark Heap, Oliver Chris, Julian Rhind-Tutt, Karl Thoebald, Michelle Gomez and Pippa Haywood are all at the top of their game.

A wickedly funny script acted out by some of Britain's top comedy actors and actresses, there are so many bits which still make me laugh out loud even years later.

After the first two series weren't there a couple of specials? Are these available on DVD?

Just the one special, and it's available either on it's own (with a big pile of extras), or as part of the complete collection box-set.

It's not great, if I remember right. And even longer than the normal episodes, if that's possible.

It did round things up though if I remember rightly.

I miss Green Wing so much. A great selection of comic actors.

I agree the special was disappointing, but the two series were superb.

There's a lot of good stuff in the Special - it's harder to laugh though because of all the "winding down" and "this is the end" signals you're getting throughout - so the story takes a sombre turn. 2 endings as well and a lot of fans thought they put the wrong one in (the other is on there as an extra).

Still, take Green Wing in its entirety, there hasn't been anything as good on since.

But I do love it. Mainly because it is so stupid.


So, comedy Marmite, not comedy dynamite.

So I don't get accused of going "Off topic" I'll continue the discussion here.

I miss it greatly. A nice slice of post-Office British comedy reaching out for something exciting.

I miss it greatly. A nice slice of post-Office British comedy reaching out for something exciting.

Love it. Wickedly funny with some of the most well-rounded characterisations of any series superbly acted by the ensemble. Farcical at times but that what British comedy is about.

If only hospital life really was as fun as depicted.

One of the few series where I have felt like watching it all over again as soon as I finished it.

As the partner of a Kiwi up here has it only just appeared down there or have you got the DVD?

As you'll see from my previous posts I'm a big fan.

I'm sure it was screened here years ago but I think I was probably too young at the time.