I met Rowan Atkinson sometime last year at Heathrow Terminal 3 (Club Class, natch..) I of course didn't treat him other than as just another person, after all, I'm as famous as him (or will be...

) ..but my companion said to him, 'Please do Mr Bean' and he charmingly replied, 'Of course, but I need the fee first!' He was wearing clothes very much like Mr Bean would wear and he was on his way to Budapest. Apart from that I really didn't take much notice, after all, I'm a busy important guy, know what I mean?

I know Alan Carr and Michael Underwood from school and I hung out with Michael during a French exchange trip to Poitiers when I was 13 and a few years later we worked for the same theatre company. Michael had the charm and humour of Will Smith but he would treat me like a little brother and take delight in winding me up.

I didn't know Alan that well and he preferred female company at school but we grew up in the same hood and one night when I was walking home from a boozy night out I saw Alan and we walked the hour long wobbly journey home. This was when it was relatively safe to walk home.

Which probably says a lot.

I met Tommy Cooper backstage at the Sheffield Fiesta Club. I was there as a bar man, and had to stock the Star Dressing Room from the main Lounge Bar. This was the 1970's (man). When I say "met him" he did speak to me, he asked me quite politely to get out of his way. [This happened also with Gene Pitney and Moira Anderson in exactly the same location in the club..] I recall Tommy C spent a lot of time after the shows in the restaurant area, and not just eating, he then hit the bar... there was a lot of booze around in those days... very funny man live, just walked on stage and the place fell apart. As is his legend, of course.

There were others, we also had Morecambe and Wise live too, (believe it or not..) On seeing their show, I believe there were few or no ad libs, it all seem to be exactly the same every night, even the stuff that seemed off the cuff (as I recall it, it was a long, long time ago..) Again, like Tommy C they came on stage and the place came alive because of them. Wow.

I recall some of the comperes too, including Marti Caine and Bobby Knutt, who were very friendly Northerners both on and off stage. Always chatted with the staff, of course neither had 'made it' very big at that time, but they both went on to 'bigger things'. Mount Everest, that's a bigger thing. And Errol Flynn he had...

Later on (1978) I actually played on the same stage with our own band.. Big night for us, Grace Kennedy (who?) was top of the bill. I signed autographs on the backs of beer mats that night, only to find them on the floor of the multi-storey car park when we loaded up our van after the gig.. that's stardom for you, all performers experience that, even Elvis ..who nearly played Sheffield Fiesta too (see article below) ..now if you believe THAT, well, I guess you'll believe anything!

I.E. that's Elvis Presley (not Elvis Castella, Costello or any other Elvis's!)

This is a pic of our band playing there, if I can load it [couldn't load it here so put it as my avatar], I am the one on bass on the right, just look at those flairs, I think we were playing 'Night Fever' when the pic was taken, or was it 'You're the one that I want' ... it might have been 'All my loving' ...memory fades... just as well, really...

There was PLENTY of that at the Fiesta too!

Interesting story Frankie.
I went there a few times in the late 70's.

My dad has meet Ronnie Barker and David Jason. It was at a Open All Hours Recording in the seventies They were both charming according to my Dad, and after the recording they spoke to the members of the audience asking questions like what did you think of it?

I used to do standup in the mid 1990s so shared the same bill as many who are now well known (back then they were more or less starting out or getting established), e.g. Dylan Moran, Harry Hill, Milton Jones...etc...etc.... On my last gig (at The Comedy Store), Eddie Izzard came back stage and gave me a long pep talk!

I parked a page 3's girls Lamborghini by the Olympia exhibition halls.
She'd had five goes and asked me if I could do it.
I did it in one go.
She thanked me and kissed me on the cheek.
Gillian ... somebody.

Is that her that studies shit?
If so, not her. 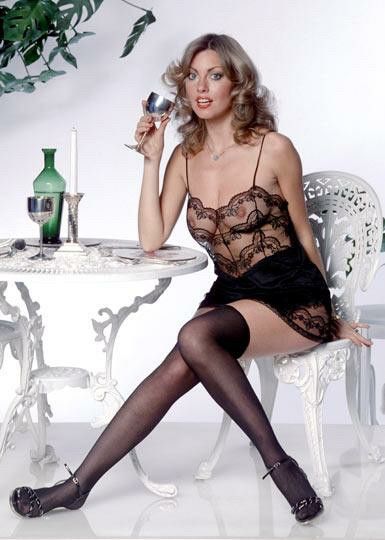 ? Gillian Duxbury is a model i.e. not a comedy star.

I did not know that.

I did not know that.

I did not know she was a model even, i.e. never heard of her!

? Gillian Duxbury is a model i.e. not a comedy star.

Perhaps not a star in your eyes, but she did feature in The Two Ronnies.