Wrong arm of the law on Talking Pictures.

Joan Collins doing a striptease on the underground in the Human Jungle on TPTV.

Finally got round to watching A Very English Scandal. Brilliant stuff, especially Hugh Grant, who has developed into a cracking character actor. I particularly enjoyed the fact that Jeremy Thorpe had to resign because he was caught in a lie. You really wouldn't get that now.

Judge Nutmeg is back!

I'm watching the ITV Election Debate in which party leaders or, in the case of the Conservative and Labour parties, substitutes for leaders who couldn't be bothered to turn up, are answering questions from the audience.

There's an awful lot of virtue signalling going on with regard to the killings on London Bridge: the speakers are spending more time expressing sympathy for the victims and their loved ones than they're spending answering the bloody questions!

She's saying how she travelled all over the world with Jeffrey Epstein, in private jets, meeting the rich and the famous and generally enjoying sort of lifestyle that very few people in history have ever been able to afford.

Despite extensive googling, I cannot find a single instance between 2019 and the dawn of civilisation of a slave being treated quite so well.

A key piece of evidence which, as far as I'm aware, has never been mentioned is the look on her face in that photograph with Andrew.

Does she look like a girl who is under threat?

Does she look like a girl who is unhappy?

To me, she looks like a girl who's having the time of her life. 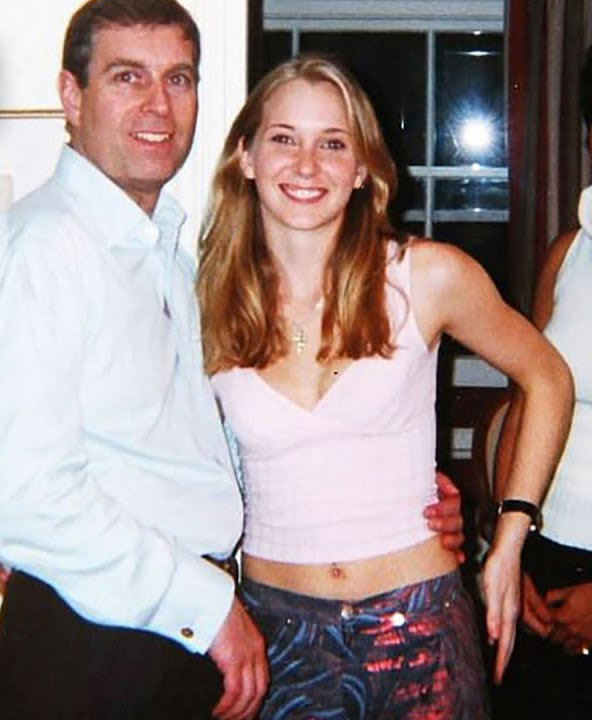 According to Panorama, the Daily Mail paid Virginia $160,000 for her story about Andrew.

And what is the significance of having strangely red hands? I've long suspected the Royals of being aliens - maybe this is the sign!

Perhaps it's because they've never actually used them to do work.

She's saying how she travelled all over the world with Jeffrey Epstein, in private jets, meeting the rich and the famous and generally enjoying sort of lifestyle that very few people in history have ever been able to afford.

Despite extensive googling, I cannot find a single instance between 2019 and the dawn of civilisation of a slave being treated quite so well.

A key piece of evidence which, as far as I'm aware, has never been mentioned is the look on her face in that photograph with Andrew.

Does she look like a girl who is under threat?

Does she look like a girl who is unhappy?

To me, she looks like a girl who's having the time of her life.

According to Panorama, the Daily Mail paid Virginia $160,000 for her story about Andrew.

While I think he possibly gave her one, or three I do now think she's being opportunistic and probably wants a stack of cash she knows all three of her accused have. She possibly feels rejected after her youthful looks faded and made her surplus to requirements while Epstein recruited younger versions. There is little that infuriates a female more than this. And knowing that it took three hugely rich acquaintances of hers out of her scope must really wrankle if she could do with some more money.

There is also a huge flaw in her story or the way she told it. If she was so disgusted by sex with him why do it twice again at different times and places? But as I've said her lawyers will claim coercion of a minor and they will be top lawyers looking for cuts of huge payouts to the victims from his estate, he's already convicted of past offences his suicide will imply guilt of all pending cases and it's in the middle of the me too movement. Andrew needs a very astute team of lawyers if this goes to court but then he won't have any trouble getting them. I bet Charles is very cross with him though.

I don't think Andrew will be going anywhere near court in the capacity of "defendant" as, even if everything Virginia Roberts says is the gospel truth, none of Andrew's actions was unlawful in the jurisdiction within which it took place.

The media are extremely fond of describing her as a "teenager" and a "minor" at the times of the alleged incidents but they're not quite so fond of acknowledging that, on each and every occasion, she was above the age of consent.

Have just watched the two hour programme on reindeer migration on BBC4. Billed as a documentary, this was in fact Slow TV. That is not a concept I claim to have invented although I did post it as an idea on several forums about three years before it ever happened. No verbal commentary. Just a series of captions modestly incorporated sporadically with the vast landscapes. Sound wise, only a small number of human words from those involved translated. Mostly silence other than the tinkling of bells on the animals and the great joiking from Johan Anders Baer. And it was ABSOLUTELY STUNNING.

This has to be ONE OF THE MOST BEAUTIFUL PROGRAMMES ever broadcast by the BBC. I think we all sense uneasily that our worlds have gone literally mad. If ever there was a highlighting of it, it was in the sheer simplicity and normality of what was depicted here. And incredibly while nothing of a manufactured dramatic nature occurred in it, it was not without drama as it is supposed to be, Not very dramatic. I mean really this should be prescribed on the NHS for anxiety and depression at the very least. It is that good. Hopefully it will be on BBC Sounds (what was the I-Player). Watch it. Take the time out to enjoy it. Tell everyone on Facebook about it. MISS IT AT YOUR PERIL. Marks out of 10? 28. No. Make that 35.

Johan Anders Baer.- Calbmeravkaleames (In The Blink of An Eye) - https://www.youtube.com/watch?v=PIDd7EfcCRM

........and me favourite by him, the very atmospheric Maret Anne - https://www.youtube.com/watch?v=9ab8bHcXbUE

And as it happened, or maybe not if as I sense I have just suddenly gone very pro animal over human : something which when I look back on my life was always going to happen but why did it take so long?, the other outstanding programme this week was about cows. Again BBC. The middle one of three. I'm upset that I missed the one on sheep. Pigs are next week. This again was fantastic stuff and I strongly recommend it. I was always a sheep and, to a lesser extent, goat man.

But it was only three years ago that I was standing alone by cows on the local downs and had a slightly biblical moment. Suddenly, they looked really beautiful to me. I spent about an hour looking at their eyes and to be honest I never got over it. Once experienced, never forgotten. I am in no doubt I prefer cows faces to human ones. I'm not sure why others don't.

I have issues with three types of standard animal programmes. The too real and gory (much as I admire Attenborough it's normally with him things tearing other things apart), the rescue programme (I don't like to see animals in pain even if they then recover which often they don't) and the overly cutesy (where they are portrayed as only semi real). But this was something else. It told you about how their minds worked. I have a strong preference for farm animals because I especially like them AND they get a bad press. They are sort of portrayed as not sexy which to my mind fundamentally - and crassly - misses all of life's crucial points. The cow programme endorsed my positive attitude. The bits with the experimental mechanical brush and particularly the brass band with them in the field were just amazing. It was a real education to me.

Is this an argument for ending meat? Not for me. I don't blame them for climate change. That very idea is offensive to me. And I know that if we ended meat we wouldn't see them again and that would be an absolute tragedy for often unknowingly they are so close to our souls. I'm very pro farmer. Very. But I'm strongly - no, staunchly - for ultra humane living conditions, transport and where apt slaughter. And on having it proven by this programme how intelligent these animals are, which I always thought sensitive people could see, for it is in their vibe, that now applies double fold.