I thought you were already on the ship Charley

I've been reading through this thread and it gave me a bit of thought as to my own nicotine past. I was once a smoker but gave up in 2000, which was a shame really as I'd smoked for decades and was really good at it. At a push I could smoke about a hundred plus fags a week and could do it any time I wanted to, no problem.

But as for the impending ban, well, that's just irrational. Non smoking zealots, just consider the implications of the government succeeding in getting the entire smoking population to kick this unmentionable habit. Well, we'd all be incredibly healthy but the country would be f**ked.

If nothing else, cigarette money really does, amongst other services, keep the NHS ticking over and let's not forget that without all that dirty cigarette revenue, and still remembering how incredibly healthy we'd all be, the country would still be screwed. Personally I can't stand cigarettes but I defend the right for people to smoke and let's face it, the country can't afford for them not to.

On the other hand, I could get mullered on several pints, total a bus shelter and glass a complete strangers face but, hey, at least I won't be invading somebody else's environment with a legal product. But if that's the price to pay for living in a democracy then f**k it, let's set light to smokers everywhere, the filthy f**kers.

If that's what smoking does to your punctuation, I want no part of it...

Don't know what went wrong but have now started smoking again - sorry, I meant corrected the text. Has anyone else had simmilar trouble with text changing all on its own just because it can? Aaron, what's going on!

I have told Aaron and he is being a gent and looking into it for us.

I have told Aaron and he is being a gent and looking into it for us.

It would have happened at some point anyway but I bet there are more than a few very disillusioned Labour supporters who feel yet another nail being driven in...


Their own fault for voting for the twats, quite frankly.

Came across this on the back of a 1977 issue of Tit-Bits (is it still going?) 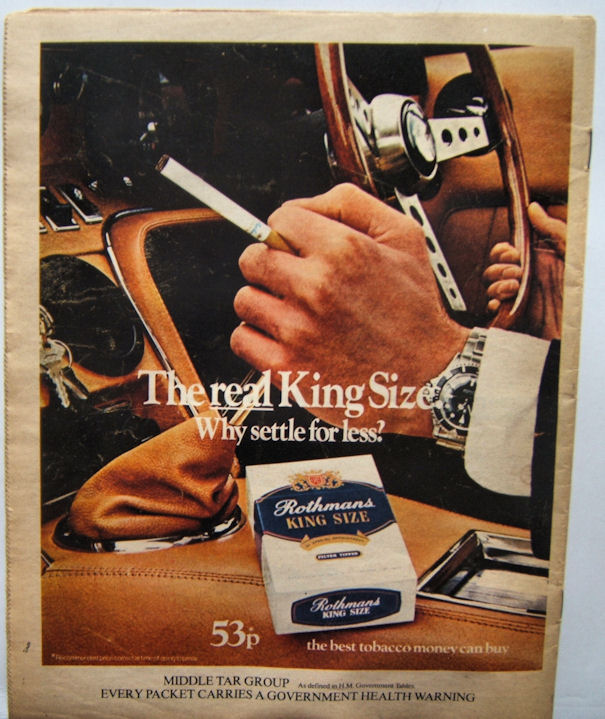 Obviously a fag for the man who drives a posh car.

Marlboro Reds (proper man's fag) are around £12 a packet now. Bulk buy from the supermarket to save that dreadful trudge to the corner shop every day.

Marlboro Reds (proper man's fag) are around £12 a packet now.

Cheaper to use heroin!

And easier to kick

And easier to kick

And how did you find the cold turkey?

And how did you find the cold turkey?