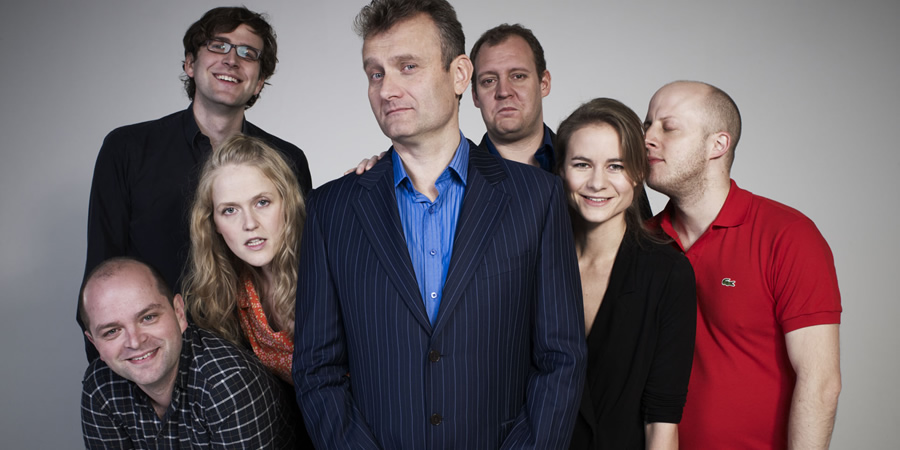 I love the interpretative dance round, I just wish they gave more notice as to when it's about to start as I want to mute the TV and see if I can figure out the song without hearing the lyrics, but have been too late with the remote.

I'd quite like to see a whole load more of David Armand doing these, he's a great physical comedian.

Have you seen the Torn one he did? (You probably have)
Best thing everrr.

In case anyone wants to see it again (this one has a special surprise guest) http://www.youtube.com/watch?v=9dxf6keoYV0

The three comedians sitting at the front: terrible.

I heart Justin. He's by miles the best.
They seem to know that as he's on every week.

They have had some good, different games this week.

For those who don't know, David Reed is a member of The Penny Dreadfuls like Humphrey Ker.

I haven't watched this since show 2. It just wasn't 'doing it' for me. Does this make me a quitter?

I heart Justin. He's by miles the best. They seem to know that as he's on every week. They have had some good, different games this week.

The games have been awful! No thought at all has gone into them. Especially that 7 Year Round.

I liked the 7 years one! And the black and white one.


I thought that it probably did. Ah well...

I know the BBC are scared of TV fakery, but they really should have let Justin change into a clean shirt.

Likewise, having to fix Wayne's microphone pack was not a particularly funny moment and would have been better edited out.

What was the point of being upside down in the upside down round? They were just improvising a song unrelated to their orientation. A pointless gimmick.

I liked the old fashioned Jerry Springer, although it was very similar to a classic US Whose Line round, where they instead had fairy tales played out on Springer's show.

As much as I loved Armand's literal video on the first episode, the repetition with it is getting a bit boring now. Haha, he is feeling breasts. And again. And again. Yes, breasts, we get it.

The dinner party round worked for me unlike last week. They need more like this where the performers get to play off each other rather than Hugh.

Wayne Brady's experience at these kind of improvised games shows.

My infatuation with Ruth Bratt remains.

Overall it still feels a poor knock-off of Whose Line rather than successor.

I thought the fixing of the microphone was the funniest bit.

"Look, children! Look at the ageing comedian in drag!"

Was Greg making fun of his apperances on CBBC there?

Quite enjoyed tonight's episode. Seemed more confident and sure of itself, with a strong line-up. Although they had no idea what the song was even after being told.

"Look, children! Look at the ageing comedian in drag!"

Was Greg making fun of his apperances on CBBC there?