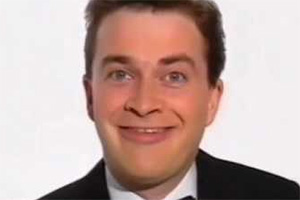 Is there any particular reason why the only Harry Enfield DVD available is the show he did on Sky? I'd like to rewatch Harry Enfield and Chums and I've never seen Harry Enfield's Television Programme

Because BBC Worldwide/2 Entertain charge astronomic fees to other companies for programmes they own, and unless there's a big marketable opportunity, don't tend to care too much about archive programming themselves.

However, I wouldn't be surprised to see the shows released within the next couple of years. We're just into the 20th anniversary of HETP, so there's plenty of market there to take advantage of if they want to.

I would love the to release them on DVD. I have all my Dad's old ones on video and still watch them. But they're getting a little old.

I can't believe neither of the series have been released on DVD! Harry Enfield's Television Programme and Harry Enfield and Chums were arguably two of the most successful British sketch shows of all time. They were going to release a box-set of the latter in 2007 but it was cancelled. I've hear they might be doing one called 'The Harry Enfield and Chums Television Programme: The Collection' featuring both series of each. Does anybody know if this is true?

Not to rule it out, as DVD companies are understandably cagey about upcoming releases, but I've not heard anything about such a release, certainly not by that name. There have been rumours of a box set containing both series for a few years now, but evidently none have come to fruition so I can only assume to be fans' wishful thinking.

It is nevertheless utterly bizarre that neither show has seen the legitimate light of day.

I think I read about that release on Wikipedia a while ago. It's probably just a load of rubbish though, shame really...

Just been mindlessly browsing Amazon as you do and there it was.

At long last, Harry Enfield And Chums is coming to DVD.

It's a collection of all the series plus Christmas special and other extras.

I love Harry Enfield and chums I loved lulu and harry and kevin the teenager the old gits . can't wait this is going to be on DVD can't wait

Just been mindlessly browsing Amazon as you do and there it was.

At long last, Harry Enfield And Chums is coming to DVD.

It's a collection of all the series plus Christmas special and other extras.


You'd have known about this a couple of months ago if you followed us on Twitter or subscribed to our newsletter!

I Recorded them on DVD recorder

Do you reckon Harry Enfield's Television Programme will see a DVD release?

Do you reckon Harry Enfield's Television Programme will see a DVD release?


No way. This really is too good to be true!

On Amazon now there is no longer a pre-order date.