Friday Quiz August 8th 2014
1. A man trapped under a train was released when hundreds of passengers pushed to tilt the train. Where did this happen? Australia
2. An elephant was pictured this week using what rather unusual object as a back-scratcher? A car
3. Which two English counties share a border with Scotland ? Cumbria & Northumberland
4. When would you wear these? When peeling onions

5. What is the name of the railway operating company in the US? AMTRAK
6. Who replaced George Dawes as the scorer on Shooting Stars? Angelos Epithemiou
7. Which two actors have played James Bond just once in the movies? George Lazenby & David Niven
8. What cocktail is made using equal measures of champagne and stout? Black Velvet
9. What name links these pictures? Aphrodite (Mira Sorvino starred in Mighty Aphrodite and 'Aphrodite' is a Kylie Minogue album)

10. Who is this? Eddie Van Halen
11. In architecture, what name is used for the decorative end of a gable, often in the form of a spike or a bunch of leaves? Finial
12. Which is the only American president that Queen Elizabeth hasn't met since she came to the throne? Lyndon B Johnson
13. Name the TV series. The Jetsons
14. In 1972, which form of punishment was finally made illegal in the United States? Flogging
15. In mythology, which monster terrorized the local population by asking them a riddle and devouring them when they couldn't answer it? The Sphinx
16. According to a famous travel guide, what is the most useful thing an inter-stellar hitchhiker can carry with them? A towel (from 'The Hitchhikers Guide to the Galaxy)
17. The Academy Awards ceremony was delayed in 1968 after the assassination of which person? Martin Luther King 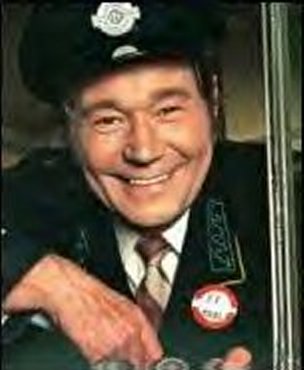 Hello steve have you got one for us this week? I wonder if 8 is Richard Branson

"I think Gordon is right!"

Having studied and collected antique newspapers for over 40 years, this is an easy one for me..........

I withdraw my offer.

, but offer this up for a different one:-

Sorry
I forget to mention it every time

Surely, that wasn't me, 'cause I know nothing...