In some games that is harder than where's wally.

The nearest The Arse got to lifting a trophy this year... 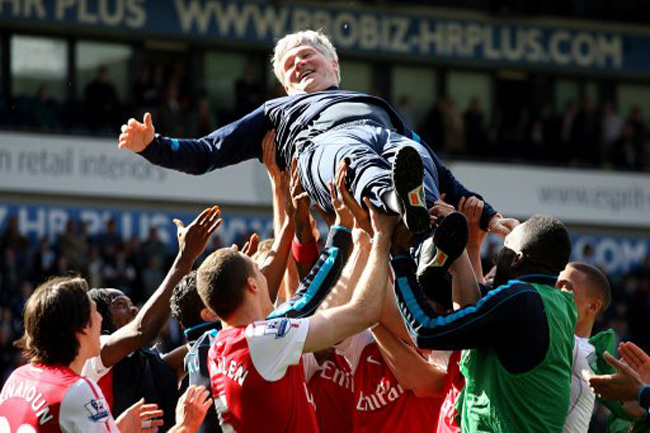 Quote: Chappers @ May 14 2012, 10:38 AM BST HOO-BLOODY-RAY! And in fergie time too makes it doubly pleasurable. I bet they were celebrating prematurely.

About time something didn't go their way.

OK - stopped celebrating - well almost. Let's get down to the serious side.

Barton is an absolute discrace and will never change. You can take the boy out of the gutter etc...*

Graham Poll was suggesting the penalty points could be totted up against him and he could miss 10 games next season.

Really QPR need to do the decent thing and sack him. Otherwise there won't be much sympathy for them.

I really wouldn't be surprised if ferguson signs him looking at their past record of signing thugs.

* Notice I didn't say out of Liverpool.


Over the last few years, I have noticed that you do seem to have a bit of an obsession with Liverpool, don't you? I don't know what part of the city Barton is from, but we certainly don't have little c**ts like him in my neck of the woods. I seem to remember, when I first started coming here, you put the blame for British society's rapid degeneration solely on the people of Liverpool. I remember thinking about that last summer, when I watched your city go up in flames.

I think maybe you should have a look at some official UK crime statistics some time, because you'll get a big surprise if you do. Yahoo.com regularly shows Top 10 lists for the UK cities with the highest rates of different crimes, going back over the last few years, and Liverpool is never on any of them. I'll admit, even I was surprised when I found out, after hearing so many comedians over the last 20 years slag us off.

Barton is a violent nut-job c**t, but that still doesn't take away the fact that Liverpool didn't make the recent "Top 10 UK cities with the highest rates of street crime" list. Other Top 10 lists that the city failed to figure in included those for Car Crime and Burglary, as well as other things like Unemployment and Cheapest House Prices. Actually, I think I've mentioned this to you before, but the dark horse of UK cities, when it comes to crime is Nottingham. Nobody ever talks about the place, but it's topped one of the main lists for about 8 years in a row. I once read that the most crime-ridden spot in the whole country was a pavement outside a McDonald's in Nottingham.

They could have played 'Where's Walcott?'


Oh, you just went straight for the insult

Chappers, I've just read your comment again, and can't work out whether or not you really were having another go at Liverpool. That's the problem with forums sometimes. Whatever, Barton's still c**t anyway.

for Will Cam
View original

Thanks AJGO. I bet your dad was as relieved as I was.

Thanks AJGO. I bet your dad was as relieved as I was.
View original


Yeah, congrats to all two of you

What do you reckon to spending all that money to get rid of Barton?

New kit, new signing, just a few weeks to go until he injures his foot in the Euros and all our hopes and dreams for next season are as torn apart as his ligament

Quote: catskillz @ May 15 2012, 4:29 AM BST Chappers, I've just read your comment again, and can't work out whether or not you really were having another go at Liverpool. That's the problem with forums sometimes. Whatever, Barton's still c**t anyway.
View original


No I wasn't actually. just what an unacceptable twat he is. Also QPR should be able to sack WITHOUT paying up his contract as he's basically made himself unemployable - except by Manchester United who are desperate.

One thing you don't have to worry about with mens football.

What do you reckon to spending all that money to get rid of Barton?


I think it was very naive of the club not to have some sort of behaviour get out in his contract. His kick at Aguero was outside the normal implied consent for contact sports so I would be encouraging him to complain to the Police (if it's good enough for Terry!).

Quote: Will Cam @ May 15 2012, 5:25 PM BST I think it was very naive of the club not to have some sort of behaviour get out in his contract. His kick at Aguero was outside the normal implied consent for contact sports so I would be encouraging him to complain to the Police (if it's good enough for Terry!).
View original


Actually why hasn't he been arrested for assault?

I think it's time we did Hodgson's job - let's pick our squads for the Euros. A virtual £1million for the one that gets the most of the 23 correct. Here are mine...

No Walker, Parker or Walcott? Are we assuming that they're unfit? Or just not good enough?


I nearly had Walker, Walcott is anonymous and Parker is almost certainly injured. I've definitely got Ferdinand wrongbecause it's just been announced he's not going. I guess that means Terry is.


Walker isn't going now either, it just gets worse an worse each week.

Even as a United fan I might have Johnson over Jones as reserve right back, Richards has been a bit out of sorts recently and I am not entirely convinced with Jones.

In other news, finally got to see United live tonight at Winsor park, I am a happy boy!


That's not good. Parker and Walcott touch and go too.

No Rio's no big loss, was never as good as Terry anyway. Terry probably just cover for Lescott and Cahill now.

I still can't see point in Barry really, bet the Germans hope he plays but I would keep him as cover.

No Crouch, shame, but Carroll has to be in first team.