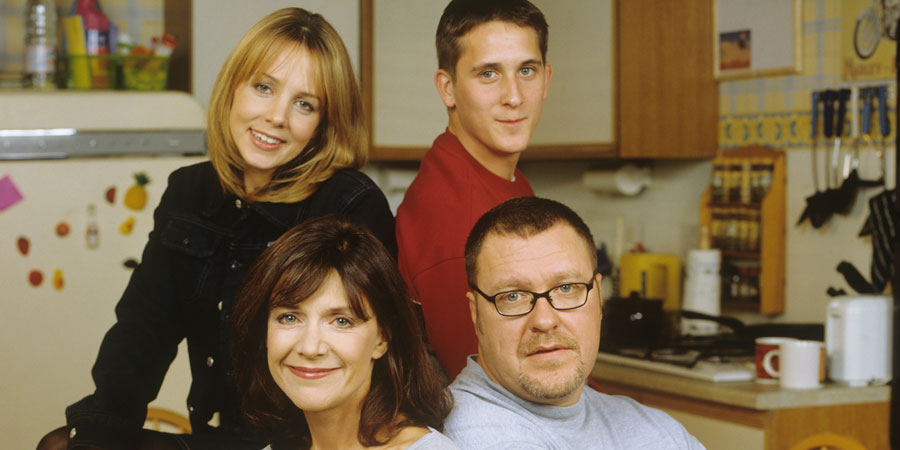 The Porters seem to be a perfectly average bunch - mum, dad, son and daughter. This family, however, are anything but ordinary

Hi to all 2point4 Children fans.

First of all, Aaron please do not close this thread! This is an important one.

The message is simply this

The BBC will only release the remaining series on DVD if the public show enough interest. If you want to see series 4-8 of 2point4 Children released onto DVD then write to the following address requesting they release them.

Please show interest all it will cost you is a stamp and a short trip to the post box.

I for one am a huge fan and really would like to see the rest released. I will be so gutted if they are not. Come on people please, this could be our last chance to get it released, otherwise the show will just be buried and forgotten about.

Come on please the show is fab, write in and show your support that you want it released.

This could really have gone in one of the many existing threads, but I'll let it pass this time.

To be honest I'm not sure I care anymore. A year ago I would have ardently supported any campaign to release 2.4 Children/Birds Of A Feather/Any ITV sitcom like Barbara, Second Thoughts, The Piglet Files, The Upper Hand, Faith In The Future, Surgical Spirit etc... but I have come to the realisation that the companies and broacasters of the shows rarely care about what we want. They will test water by maybe putting out first series if they think it may get noticed by having to do very little ground work but if it fails and it looks like they may have to do something substantial or at least something with more effort (like better artwork/packaging, promotion, content features) they give up.

It is same with record labels; both think that they can get away with putting out bare minimum and when it doesn't sell they don't seriously contemplate the reasons why it didn't sell was perhaps because a) no one knew it was released or b) it did not feature what people actually wanted. For example Series 1 of Birds Of A Feather would have been nice to have had Sailing on it which was the Christmas special for that year. They choose to put it on the Australian version which would have sold less anyway. Also I have seen comments by some that the cover of BOAF series 1 looks like some low budget lesbian porn film and I sort of understand where they are coming from from some weird aspect.

Agreed. Whilst I'm not personally bothered about extras on DVDs, the lack of the Christmas special on the Birds Of A Feather Series 1 DVD was just plain lazy - very odd considering that they actually had some extras on it! And the less said about the artwork the better really (although IIRC it's been rereleased with a more professional design).

I think that record companies are much worse than DVD distributors for this though. Particularly given that mp3s are so easily distributed. They just do not understand that people are quite happy to buy things if a) they know it's available, and b) it's actually worth it. It's not really feasible to do a big advertising campaign for, say, Watching Series 3 on DVD, in the same manner as movies or big-name music artists, but so little work seems to go into things. We're very rarely even getting notification of DVD releases here now, and largely just spotting them on Play, Amazon, etc, by chance. It doesn't take much to send out an e-mail.

Anyway. Yes. We need a greater dedication by distributors. Some are better than others (Universal Playback are THE worst in history), but even the best have failings.

I'd like to put a big shout out to Network though, for finally getting Two's Company Series 2 onto DVD in the UK.

Even a few adverts in TV magazines or showing a repeat of the show and at the end have some announcer say "Re-live series xy of ABC now available on DVD" would be better then just letting things just drift out there and sink without a trace.

Thanks for the support. It's nice to know you are loyal NOT!

Sorry but I feel all this is pointless now. I started the petition to get BOAF on DVD years ago (3-4 I think) and sod all has happened. I have emailed the petition to various DVD companies and BBC and other actors who were in BOAF like Peter Polycarpou and nothing!

I would love to have the remaining series of 2point4children (and BOAF) but cannot seriously see it happening when the companies are more willing to re-release series endless times (Gimme Gimme Gimme/Dinnerladies) or put out tired compilation DVD's with best of episodes/themed releases (One Foot In The Grave/Only Fools And Horses.)

They will be released, Mike. It's just a question of 'when'. If the rumours of a new series of Birds Of A Feather are true, then you can expect that pretty soon. You sound like you're under the belief that one or two petitions signed by a few people will mean it's put out within 6 months. It's just not the way it works. The existing BOAF and 2point4 Children releases were disasterous, to say the least. Barely sold at all and left the respective companies on the brink of collapse. IMO that was more to do with the marketing than the content, but the fact is that that is going to make any distributor extremely nervous, no matter the perceived level of public support.

Thanks for the support. It's nice to know you are loyal NOT!

Sorry for the lack of support on this, mate. I'm having trouble drumming up the requisite concern about the fate of '2.4 jokes', as I wittily refer to it. However, I am booked in for a lobotomy next thursday so hopefully once I've had my frontal lobes removed I will find '2.4 jokes' (so funny I said it twice! ha!) amusing enough to support you in your bizarre quest. Fingers crossed!

I am surprised at the lack of 2.4. I seemed to remember that it was pretty good and certainly surreal. I can understand the fustrations of a sitcom you like not appearing on DVD when they seem to release all-and-sundry, except the one you want. Aaron's right about (to paraphrase), 'what's hot and what's not' theory. Region 2 'Fraiser' has long been released in its entirity, however, Cheers has floundered on season 6 (a matter of time, I'm sure).

As so rightly mentioned elsewhere in this thread, when they do relase something it has a glaring omission. Take 'Last of the Summer Wine' for instance, why on earth did they not include the pilot with the series 1 DVD. Playback managed it for 'Citizen Smith'! I'm hoping it can still be added to any future release (if any, I have decided to quite buying them after Foggy leaves for a second time!) And if anyone mentions 'having to get clearance...' I will scream, whether it's true or not.

I personally wish they would release some more 'Sykes', fantastic writing and genuinely funny, yet it stalled at the first colour series.

I'm glad to see that Amazon has penned in the release date for series 5 of BBC Morecambe and Wise and the 2nd seires of their Thames era.

What seems to be a glarring omission though is the lack of Kenny Everett on DVD. I bought the 'Best of the Naughty Bits' when it came out, but I took it back because I was so pissed off with what was not in there.

I guess time will tell.

The Sykes release was shocking. To market what was the first series of a new programme (IMO) as 'The First Colour Series' was utterly barmy. Utterly, utterly without sane reasoning. I happen to know that Network also held the rights to the later series, but that these have long since lapsed back to BBC Worldwide.

Similar on Till Death Us Do Part. Why could they not just market the existing episodes of earlier series', and then S4 and 5? Really quite shameful.

I gave up waiting for Sykes a while ago now and collected the rest privately. And I really must thank Paramount for repeating The Kenny Everett Television Show for me to record.

Nearly 10 years on from this appeal and there is still no series 4 and onwards release.

It is utterly bizarre how they didn't release them all when this was the mainstream, prime time sitcom of the 90s for families.

They do not make them like that anymore - well, apart from when My Family was made, but I much prefer 2Point4 Children overall.

I truly regret not downloading the Youtube videos somebody had uploaded a few years back, as there were several episodes available once.

They do not make them like that anymore - well, apart from when My Family was made

All I remember about "My Family" is that Robert Lindsay and Zoe Wanamaker both threatened to walk away from the show unless the scripts were significantly improved.

There is a bidding war for series 4-8 some smart arse has put together.