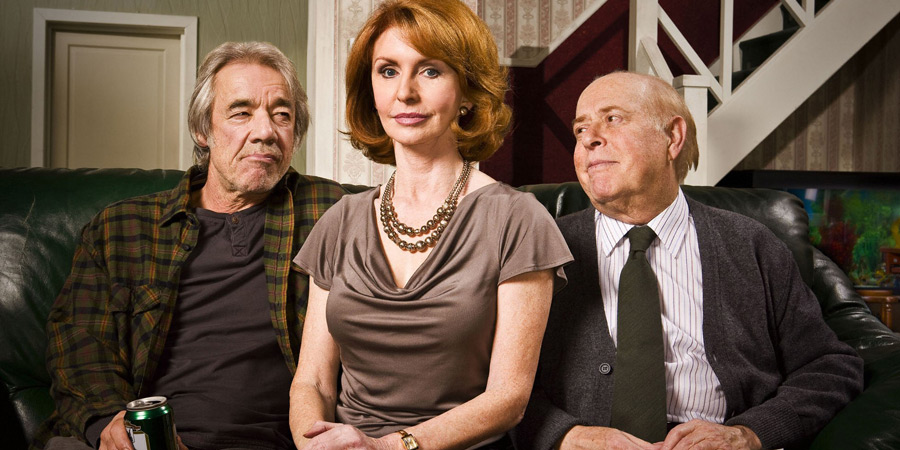 
Do you have one?

Do you have one?

Another series I found hard to enjoy. It got better. And was much better that the other comedies that aired around about the same time but it still lacked something.

Oh, and Katherine Parkinson (is it? I'm not sure) is playing yet again the same character. The IT Crowd, Doc Martin and The Boat That Rocked - yep, she's the same.

Yep, that's her name. Can't say I've seen the others, but I didn't think that there was a massive similarity to Jen.

Yep, that's her name. Can't say I've seen the others, but I didn't think that there was a massive similarity to Jen.


Well, perhaps not quite The IT Crowd but she is exactly the same in Doc Martin and almost in that film I mentioned above.

Yes, agreed it's an average sitcom in the old standard format, I'm a fan of trad format sitcoms but obviously I prefer the funniest and best written ones. The Old Guys is certainly not as painful as some (like My Family) but there isn't a lot that's new here is there. That said I can watch the thing the whole way through, it is not dire in any way, it is solid, respectable but not entirely realistic looking. The writing is solid, quite strong in parts but again not entirely original, we have actually seen rebelious and naughty older people on sitcoms before you know. I do like the way Lloyd Pack has just gone for it in his portrayal though, in the episodes I've watched I thought his acting has been fab. No, to be fair this sitcom could have been a lot worse than it is. Compared to most current sitcoms it's actually pretty good.

Don't pick on My Family! I am one of the few people on this message board that actually likes the 'middle of the road' stuff such as My Family, The Green Green Grass and even the James Dreyfus series of My Hero.

Don't pick on My Family!


My criticism of the show has nothing to do with its traditional format.

even the James Dreyfus series of My Hero.

(To be fair, I've not seen much of it. But that's probably for a reason.)

My Hero. I cannot think of a more dire comedy series than that, and I use the word comedy in its absolute loosest interpretation.
From Father Ted to that shite, unbelievable.
I suppose he has to pay the bills as well.


I do apologise for my taste in British comedy. If it's crap, I like it.

I read something about Fawlty Towers on an earlier page about that if it had been judged on the 1st series it wouldn't have returned.

Sorry for digging up an old thread, saw this being advertised on Gold and I was like WTF!! Two comedy legends together!! So I recorded all the episodes that are coming up, so far I have watched the two that have been recorded upto this point.

Okay, it's not fantastic, there are flaws, situations could have been developed a little more and perhaps with a bigger budget they could have some really good stuff in there. I was surprised at how good Clive Swift looks and moves for his age and the chemistry between Lloyd Pack and Swift is pretty decent.

For future series I would hope to see some other famous sitcom faces making cameos, maybe some more adventurous plots and I certainly approve of the slightly dirty remarks at times, it's so odd yet funny hearing Clive Swift say "tit" and "fanny" after his role as the genteel Richard Bucket.

I'm glad I checked this out, for nostalgic value and good traditional comedy it's great. I think you could do a lot worse, these days BBC sitcoms seem a little weak and routine, I'm hoping Last of the Summer Wine is given a good conclusion and someone is brought in to "help" Roy Clarke, a young talent to inject some of the crudeness it had in it's early years and that My Family finally gets a decent send off because it's getting tired.

I'm happy to see The Old Guys being commissioned by the BBC in a decade of filthy sketch shows and "chav" comedies.

You should stick with this. It really does improve as it goes on.

Yes, it gets better as it goes on, I'd agree with that.

The writers have since said they thought putting in some fairly adult gags - and most of the 'Courtesan' episode - was, in hindsight, a mistake... so they'll be slightly less controversial in Series 2.