Worse.
His licence had been revoked at Christmas because he was thought to be a be "unstable".
Four weeks anger-management - "there you go, sir your triple-shot shotgun."
FFS.
If you have to go within 20 yards of an anger-management course you shouldn't be given a gun. Ever.
Personally, I think you should have to prove "overwhelming need" if you want a gun ie it's part of your job.
There's no way a dick-less wonder like this would get a gun unless the State gave him one.

If someone WANTS a gun - they are clearly the wrong type of person to give one too!

Exactly. Why this lump of shit was allowed a firearms certificate is sheer madness - all I'm waiting for now is for some c**t to say "Lessons will be learnt from this"

This country is run by a load of f**king idiots.

Makes you worry that some bell-end in your area also has a gun licence and is planning revenge for all his own failings.
Incel lol, is this made up condition supposed to justify their actions?
Treat everyone with kid gloves and empathy and somebody else's family ends up dead.

He had a condition that meant he was easily led and influenced. Being isolated , he was perfect pray for radical groups.

There's research from America that shows many radicalised individuals were angry and enjoy violence prior to holding any radical opinions at all. They then search the internet and join groups that legitimize their feelings. Early intervention can prevent this, research showed around 50% of those radicalised experienced domestic abuse in childhood.

I do. If you have any extras lying around the house, I'll be happy to give them a nice home.

I do. If you have any extras lying around the house, I'll be happy to give them a nice home.

Oh your an American it's different

You probably learnt to shoot one before you learnt to ride a bicycle!

My All Important Credentials

So obviously normally I wouldn't reveal such things. However, the situation has become so serious that it is now increasingly clear that it is only me again who can save the entire western world. Yes, it's true. While not formally elected, I have been sitting in the House of Commons since 3 June 2007 as an MP who is actually not an MP asking many vital questions. In the early days it was easy. I had a special arrangement with GCHQ which meant that I could access the chamber with no questions being asked of me whatsoever.

Until 2016, I sat on the Labour benches as Gervase Jones, the so called MP for Osbaldwick and North Dringhouses, fully aware that no one in that party had the slightest clue about or interest in anything north of Notting Hill and everyone was just so busy in-fighting I wouldn't be checked out.. It took a few skills. Just pick the debates when a novice Deputy Speaker was in the chair. Someone who knew even less about what they were doing than anyone else. Then when I got wind on the grapevine that I had somehow been found out, I shifted niftily to the SNP. It was there I became the burka wearing female MP Fatima Fahina El Fawaz Ewing-Maclennahanan, claiming to represent, oh I dunno, S muladach mi 's mi air m'Aineoil and the Isles.

Since March 2020, when I moved again, this time onto the Tory backbenches as the MP for Little Ashalming and Godbridges, Tobias Wildergrass-Kowalski, it has been even easier. Mostly I done all me questions on Zoom, just me donned in face mask, dark glasses and wiv a "come and get me if you are hard enough" woman dressed head to toe in leather and her whip alongside. But tonight, Matthew, I am delighted to say I shall again be back in my beloved Westminster to prevent world war. I shall just ride me motorbike through its back entrance and say when I am asked to take me helmet off - "You should know just how important I am, effing plebs. I am not having the peace secured since 1945 just spaffed up any big potato's walls".

So, yep, I don't even care if it is Lindsey Hoyle himself who will be in the chair. I'm asking me question.

The All Important Question

Could the Prime Minister advise how it can be that the Taliban is not merely well but clearly as fit as a fiddle given that logically one might expect significant sections of it to have been wiped out by what we are told is international coronavirus?

An estimated 30 per cent of the population had been exposed to COVID-19 by as early as June 2020. WHO warned that widespread complacency and failure to follow public health advice was creating grave risks in the community with people generally not observing physical distancing or mask-wearing protocols.

As a year and two months have passed since that date, one would rationally expect that percentage to be hugely higher, especially in the absence of vaccinations - wouldn't one? Yus! So spill the beans, fella.

I didn't even get halfway there.

Was stopped on Streatham High Road under something they called Operation Zelig.

Not only was my helmet removed from me. They took away my weatherproof leathers, then they sliced off all of my brand new tattoos.

Next some geezer in plain clothes called McEnery turns up on a tricycle. I had to sit inelegantly through Norbury, Croydon and Purley in just my underpants all a-wobble on the back of his contraption. "Ushered" so they put it back to my home.

Have never felt so humiliated in all my life.

Yes, well I am in no doubt whatsoever that Dominic Raab was indeed in Crete. But it's weird. I have just received two photos from my secret contacts which is a look-a-like if nothing more than that. The first appears to show that bloke who is obviously not Dominic Raab shirtless on a beach having his nipples tweeked by a geezer dressed as a rainbow. The second appears to show that bloke who is obviously not Dominic Raab having six women simultaneously sitting on his face and while there is a bulge in his boxers it is at most a semi. I don't have in depth knowledge of Greece myself - indeed I haven't got on a bus or walked more than two miles since March 2020 under instruction - but my guess from my internet research is that it is Mykonos and Lesbos respectively. Luckily while the bloke looks identical, it is obviously not him.

Yeah, that should fix everything... 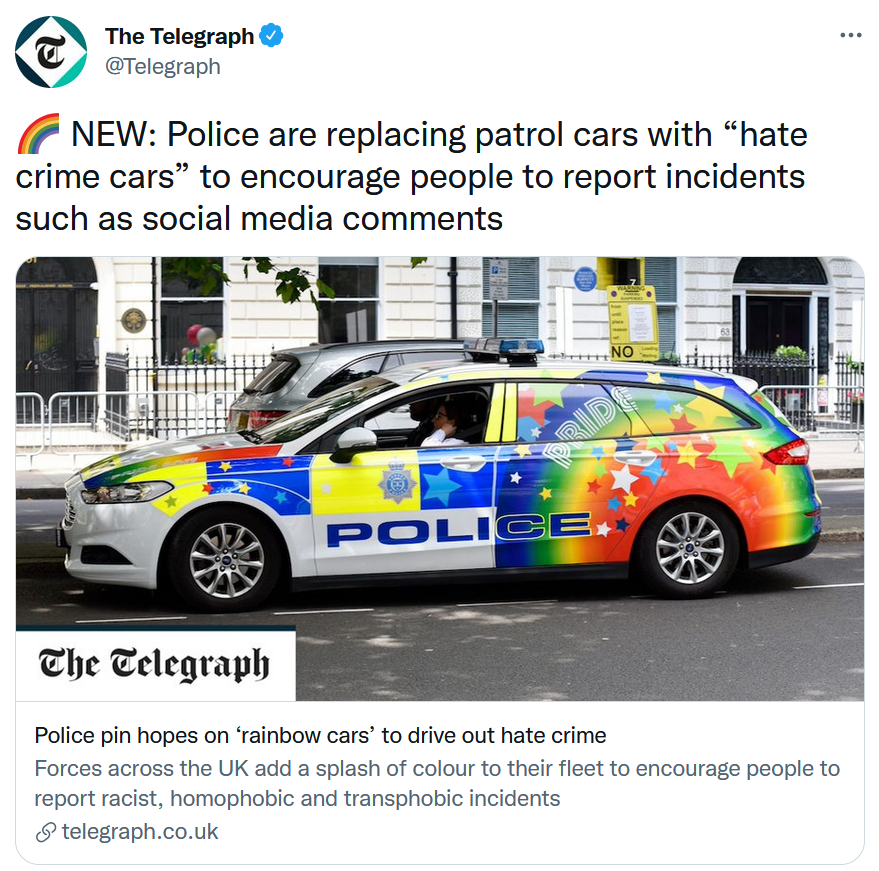 Yup, let's make the police look a laughing stock. Do they really think that is going to make an ounce of difference? I wonder what faceless twat dreamt that up to curry favour with their bosses.

On first read I thought it said "report trainspotting incidents" .

Are you talking rainbow chasers or the Puerto Rico Police who recently raided a LGBTQ bar to "verifying permits" or these American funsters ?

If someone WANTS a gun - they are clearly the wrong type of person to give one too!

People who shoot animals for fun (

), for pest control, and to get food/control numbers. Fairly common in the countryside. Even when I worked in Hungerford they were seen as a somewhat essential tool, although children 'playing guns' was certainly looked down on.

Except they are making a choice to be like that. If you choose to not shower and use Lynx instead, grow wispy facial hair, wear Minecraft T-shirts, and don't talk normally to women, you're not going to get laid.