I think it's likely that Jeffrey Epstein was up to a whole lot of shenanigans, most of which we're never going to know anything about.

However, my post above concerns only Virginia's claims about the things she and Andrew did in private together - none of which was unlawful.

Furthermore, Virginia makes absolutely no suggestion that Andrew suspected even for a moment that her consent was not freely given.

My point remains as ever it was: even if every word she's said is the gospel truth, Andrew remains innocent of unlawful behaviour during their private moments together.

Rood we now live among slaves, in nail bars brothels car washes etc. You need to read the room mate, no one has any time for convicted paedophiles who fly young women in to have sex with with people who the paedophile befriends.
There is no positive spin to this you need to knock it on the head its getting boring.

There is no positive spin to this

As far as I recall, I've not attempted to put any spin on anything.

I'm simply sticking to the facts of the "Andrew and Virginia" matter - and trying to separate those facts from the lies and deceptions being peddled to the British public by the media.

If it was in the news today, this is the thread upon which to comment upon it and that's what I'm doing - hopefully impartially and without spin.

Nail bars, car washes, and paedophiles are entirely different matters: I have no particular interest in discussing any of them.

My interest is only in Andrew and Virginia - and the media's treatment of their dispute.

I give up mate you sound to me like you'e getting your kicks by trolling , what happened ? You use to post fun and sharp stuff this is just nasty f**king garbage and thats the last rise you'l get out of me . Till you get your act together and I'm gutted at having to write that

As far as I recall, I've not attempted to put any spin on anything.

Then what are reporting, Rood? It's all about creating a spin.

If defending somebody against the relentless lies and deceptions of a TV and press witchhunt is "trolling", I think the world needs more trolls.

Believe me, I'm absolutely no fan or supporter of Andrew: I'd do exactly the same for you!

Then what are you reporting, Rood? It's all about creating a spin.

As I said earlier today, I'm trying to report the facts of the matter - having separated them from the lies and deceptions being peddled about the matter by certain TV and broadcasting media.

Apparently, Chip is having problems with the site's quote function.

He's just tried to quote from one of my posts and my words have come out not as a quote but looking as if they are his own words that he'd just written.

To his surprise and amazement, however, in the short time his post was live on the forum, he received booking enquiries from Harry Hill's Clubnite, Have I Got News for You? and Question Time!

Boris on the campaign trail today.

I think the photograph was probably taken by a Labour supporter. 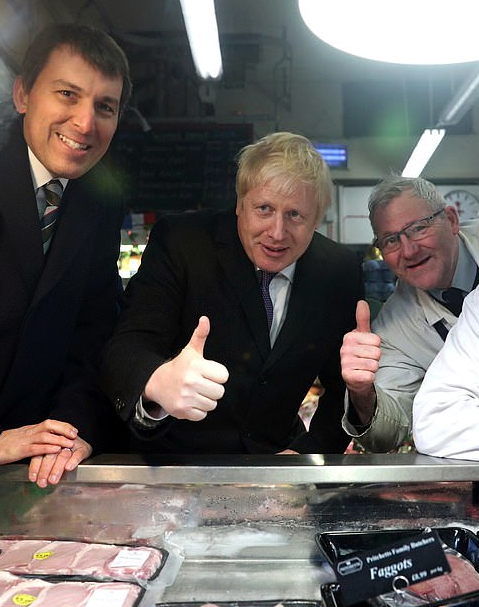 They should just have photographed a dog turd. Same thing.

BBC1's Christmas Day schedule is coming in for a lot of flak on Twitter for being less than appetising.

There is, however, better news for BBC1 viewers in the run-up to Christmas: an apparently super-duper three-part adaptation of "A Christmas Carol" is due to be screened on December 22nd, 23rd and 24th at or around 9pm on each evening.

Obviously, it won't be as good as the Alastair Sim version but then nothing ever could be.

It is said to be bloody good though!

Rood we now live among slaves, in nail bars brothels car washes etc. You need to read the room mate, no one has any time for convicted paedophiles who fly young women in to have sex with with people who the paedophile befriends.
There is no positive spin to this you need to knock it on the head its getting boring.

Ignore the parasite. I've given up even thinking of insults because troll based parasites feed off insults (maybe that should be parasitic trolls). I also agree that I've seen Rood Eye go from an entertaining poster to someone who seems to revel in causing hostility. Maybe it's due to personal reasons so let's hope it's nothing trivial.

Rood, as you said, she was 17. I would add she was only 17. As I said before, I have a daughter almost that age. Virginia Roberts was younger than 17 when she was drawn in to Epstein's web. I won't respond to it further but just because someone is later handed money for it, it does not stop what was happening being wrong in many ways or stop it being trafficking and there can be subtle (or less subtle) ways of pushing someone or pressuring someone into doing something which I won't elaborate on. Saying she was of the legal age of consent and implying she was effectively acting of her own free will doesn't take this all into account or the complexities of the situation and everything she has alleged (yes I know it is just 'alleged'). From the interview it does seem clear that she felt very unsafe and scared in that environment and I can understand how she felt. I understand the point you are making; you have done a number of posts on here about this which you are entitled to do but I won't continue this discussion further after this. I think she did imply that Andrew knew it was something more than two consenting adults getting together. She said he didn't force her and she went along with it but I think she is implying more.

As I said earlier today, I'm trying to report the facts of the matter - having separated them from the lies and deceptions being peddled about the matter by certain TV and broadcasting media.

But if I want to read it in the Guardian or the Metro I will. Unless you think the "Tory" papers tell the truth?

If professionals have this problem, what hope for the amateur?

Andrew has clearly lied on so many levels. That's not the behaviour of the innocent. I would agree with the many on here, attacking his victim isn't appropriate. I saw both interviews and Andy was the obvious lyer, imo.

I understand the point you are making

I'm pleased to hear it.

Let me just reiterate it for those who may have missed it:

Virginia Roberts tells a simple and credible story about her relationship with Prince Andrew.

Firkin believes her story? That's absolutely fine by me because, as I stated in one of my earlier posts, I tend to believe it myself.

Her story, however, contains absolutely no allegations of illegality or impropriety on Andrew's part during the times they spent in each other's company.

At the very start of the Panorama interview programme, the BBC falsely told the world that Andrew had committed a sex crime in the USA. They did this by stating falsely that "18 is the age of consent in the USA" when almost every viewer has heard and read the words "only 17" used to describe Virginia at the time she and Andrew allegedly had sex together in New York - a state in which the age of consent is actually 16.

In addition to the BBC telling a barefaced lie, several of the more lurid newspapers and websites are using deceitful rhetoric to create the impression that Virginia was underage during her relationship with Andrew.

Whether Virginia was coerced into providing sexual services for Epstein's associates or whether she was utterly delighted to provide those services in exchange for huge payments is an interesting question but it's a minor question in the overall scheme of things. What we should be concerned about is the fact that the BBC and a number of other major news media are guilty of the most appalling dishonesty in their reporting of the dispute between Virginia and Andrew.

If the BBC and the press and the public wish to speculate about how much Andrew knew about Epstein's unlawful activities, that's another thing that's fine by me.

What is not fine by me (and what shouldn't be fine by anybody else reading BCG) is the broadcasting and publication of lies and deceitful rhetoric with intent to convince the world that an as yet entirely innocent man is, in fact, a sex criminal - when the woman against whom they're alleging he committed those crimes has never alleged sexual impropriety on his part.

And to express my disapproval of the BBC's and the newspapers' dishonesty is "trolling"?