It seems unlikely that I would bother to do that.

It's not something that's been on my mind for the past 15 or so years but, given that you've recently reminded me of the occasion, I remember it clearly.

You didn't post anything on my forum, you simply joined, extracted material and reposted it on another forum along with a note telling my adversaries what you had done.

You seemed quite proud of yourself.

Of course, I might be suffering from false memory syndrome.

On the other hand, it's possible you've simply forgotten about it.

I mentioned three weeks ago reports in the news that David Jason was planning his last ever appearance as Del Boy Trotter at some sort of event in which various sets from Only Fools and Horses will be recreated and fans will be able to pay to have themselves photographed with David/Del.

I asked whether or not the affair could possibly be as simple and as outrageously mercenary as that.

Fans are apparently livid at what they describe as absolutely exorbitant charges.

A Gold Package at the event includes a photo with David in the Trotter flat and he'll sign his autograph on an item of your choice - the price is £375.

The Silver package includes the same photo op with David but you don't get the autograph. It costs £255.

The Bronze package gets you a photo in the flat but not with David, and no autograph. It costs £55.

Apparently, both The Only Fools and Horses Appreciation Society and David himself will be making a charitable donation to Diabetes UK.

I can't find details of how large (or otherwise) those donations are likely to be.

The good news is that no matter which package you buy, if you see any other OFAH actors wandering around, they might give you an autograph free of charge. It's up to them, of course. 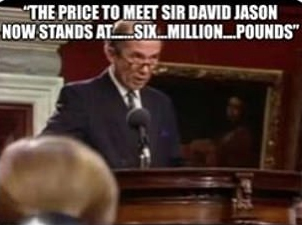 Is there a charge for asking him why he kept on agreeing to do more and more god awful specials that totally sullied the once good name of a much beloved British sitcom?

They were definitely posing, as photos of that era required long exposures and absolute stillness from the subjects.

Good point I forgot taking photos at that time wasn't just a case of pulling out an instant camera. They all appear camera shy or maybe they were thinking photos of them that can be shared with lawmen is bad for business. I've read that Billy always played poker with his back to a wall facing the door and that might be the case here.

Is there a charge for asking (David Jason) why he kept on agreeing to do more and more god awful specials that totally sullied the once good name of a much beloved British sitcom?

As well as bronze, silver and gold packages, a platinum ticket is available (at a price not listed and by invitation only) which allows you to ask David a question.

I assure you I'm not joking!

I think the answer to your question probably begins with an "L", ends with a "d" and has an "s" in the middle.

One for the older generation there, folks!

According to reports, the queen has cancelled plans for Andrew's 60th birthday party next February.

Does this mean she has inside information that he'll no longer be alive on that date?

Prince Charles in the Solomon Islands: why doesn't somebody tell him he's wearing that huge necklace inside-out? Has Camilla never heard of an iron?

His kecks are a fookin state

According to reports, the queen has cancelled plans for Andrew's 60th birthday party next February.

Does this mean she has inside information that he'll no longer be alive on that date?

The sergeant major says this was done in a jovial manner, although the smack was quite hard.

The story becomes even stranger when we learn that the sergeant major claimed to be so traumatised by the incident that he became quite withdrawn, did not want to engage with other people and lost interest in marital activities with his wife. He was later diagnosed with depression and says the memory of the incident will remain with him for the rest of his life.

The major was charged with battery but denied the charge saying that, if there had been any contact, it must have been accidental contact with his wash bag.

A court-martial convicted the major.

Shortly following the incident, the sergeant major told a woman lieutenant about the incident and says he insisted she gave him a "pinky promise" not to repeat the story to anybody.

It may be that some BCG readers are unfamiliar with the expression "pinky promise": it means a promise given by one party to another and then confirmed by the brief interlocking of one party's little finger with the little finger of the other.

For a number of reasons, this is by some way the strangest story I've heard in a very long time.

I think we need more information.

I think you dreamed about it during your afternoon nap.You've been watching too much "I'm a celebrity...."

Obviously this makes me think of the Alex Salmond business. When it first came up, I was astounded because I always thought he was too shrewd to get into that sort of thing. I'm still confused. When you read about rapes, it tends to be up a back lane with the rapist dragging off the woman's pants/ trousers. I find it really hard to imagine how A S could have pulled off his own clothes and hers. Did he have ten hands? And why would you go into a bedroom with a man in the first place? To read Proust? My theory is that she was up for it until she saw him naked (I'm trying to banish that picture from my mind). Some of the other charges are derisory. The trial should be interesting.

Did he have ten hands?

When I first read about this scandal, I was surprised to hear that Alex had allegedly held the woman against the wall while he undressed himself completely.

I'm not sure he'd need ten hands to do it but I think he'd need more than two!

Dressed as her Gavin and Stacey character Nessa Jenkins, she asked the crowd "What's occurring?"

As far as I know, nobody in the crowd was rude enough to reply, "Not much, love. Not much!"

Yes, I know it's a slow news day but it's only just gone noon - perhaps something will happen a little later on?

You you I suspect many fans of Sunday night BBC favourites "War of the Worlds" and "His Dark Materials" might not realise that both programs feature a much-slimmed-down version of the decidedly rotund Dudley Dursley from "Harry Potter".

The problem with being a portly muggle is that such a weight loss demands a great deal of self-control and determination.

It's different for wizards, of course: they just point a wand at themselves and shout "Fattimus Evaporatimus!"