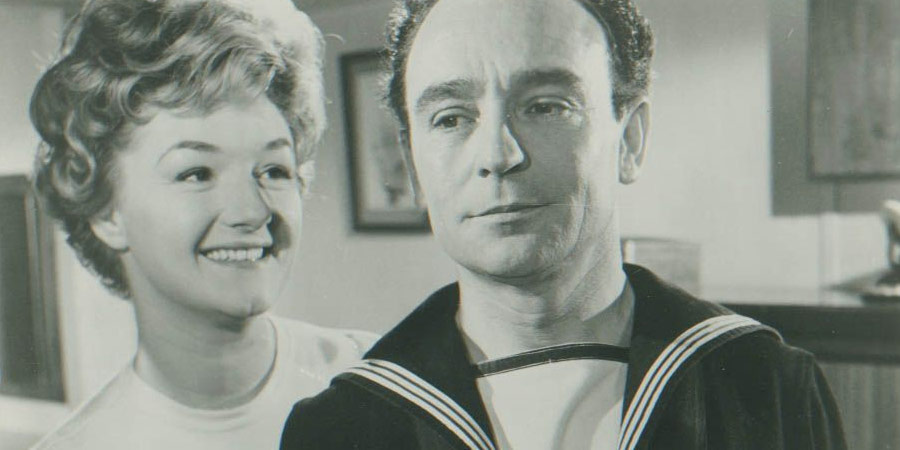 Naval comedy. HMS Terrier is thrown into disarray when the top secret plans for a new torpedo are damaged

Test firing of the Royal Navy's latest secret weapon, a torpedo nicknamed the 'creeper', is underway somewhere off the English coast. As the command ship, HMS Terrier, and her crew watch on, HMS Fox launches the missile - only to scramble in horror as the device proves defective, turning 180 degrees and sinking the Fox itself. Having rescued the crew, Captain Foster of the Terrier returns to the dockyard to await urgent revisions to the creeper's blueprints, and a visit from both its chief scientist, Potter, and the Admiral, Sir Humphrey.

A message soon arrives from London: the only spare copy of the creeper's full schematics is to be loaned to a member of the US Navy, as America is interested on assisting in development of the project, who will take it - albeit just for the day - to his own superiors in London.

Meanwhile, one of Foster's ratings, Operations Specialist Blissworth, is an electrical engineer: both keen and book-smart but terribly error- and accident-prone, he's assisting in Foster's cabin when he can't help but indulge his curiosity and glance over the creeper's plans. Almost immediately he identifies the creeper's problem and begins sketching changes on the plans, but, clumsy as ever, has soon near-destroyed the blueprints, with a huge hole right in the middle of the main diagram.

Foster and his second-in-command, Lt Cdr Fanshawe, are quick to discover Blissworth's accident but realise it'll be they who're up for the chop after leaving the plans in sight. With both Sir Humphrey and Potter due to arrive and look over the latest changes within just a matter of hours, the three must scramble to pull the wool over the Admiral's eyes and save their necks - not to mention the future of the creeper itself!