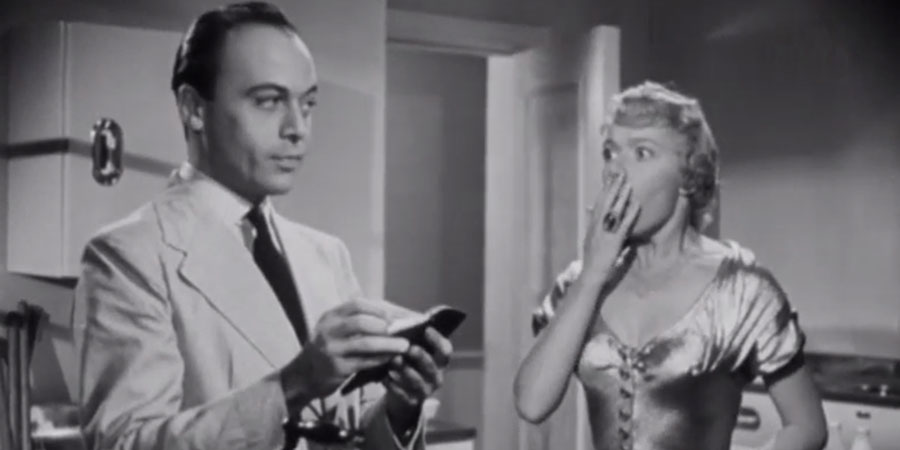 Two On The Tiles

Husband and wife Dick and Janet Lawson find themselves uniting to defeat a common foe in new butler Ford, after he tries to blackmail the pair of them.

Heading to Paris on business, Dick relies on Ford's travel advice for a pleasant hotel to stay in. On the trip, he bumps into a pleasant, pretty young woman, Madeleine, and they soon hit it off. Heading for the same hotel, the pair share a taxi through the city and end up put in the same suite - the hotel's last empty room. It makes for an awkward start, but Dick insists she takes the bed whilst he curls up to sleep on a sofa.

Meanwhile in London, Janet is invited to attend a 'farewell party' on board a boat that's due to set sail for Australia, by officer Jimmy Bradley. Having recently met the Lawsons on a separate trip, he's taken a shine to Janet in particular, much to Dick's annoyance! Ignoring his wish that she not attend alone in his absence, Janet finds herself in a spot of bother when, having lost track of time during the party, she is forced to stay on board overnight, only just getting off in time to get home in the morning rather than travel across the globe!

Arriving home around 8am rather than pm, the duplicitous Ford takes his chance and blackmails Janet for her clothing and housekeeping money, in exchange for keeping quiet about her late-night outing. Similarly, when Dick returns he's also put at Ford's mercy: Madeleine is his wife, and their entire encounter was constructed for the sole purpose of creating a compromising situation.