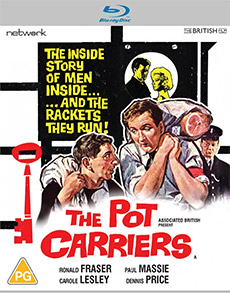 Ronald Fraser reprises his role as a petty career criminal in the big-screen remake of ITV's 1960 hit comedy-drama Play Of The Week. An authentic and original look at life behind bars, The Pot Carriers also stars Paul Massie as a first-time prisoner, Carole Lesley as the girl he left outside and Dennis Price in a memorable turn as the charming-but-unprincipled Smooth-Tongue Bertie. It is featured here as a brand new high definition transfer from original film elements in its original theatrical aspect ratio.

James Rainbow is sentenced to twelve months for GBH. Assigned to prison kitchen duties he is taken under the wing of several old lags led by Redband and becomes involved in some of their fiddles. Redband, however, is due to be released soon and wants to pull one really big fiddle before he goes!