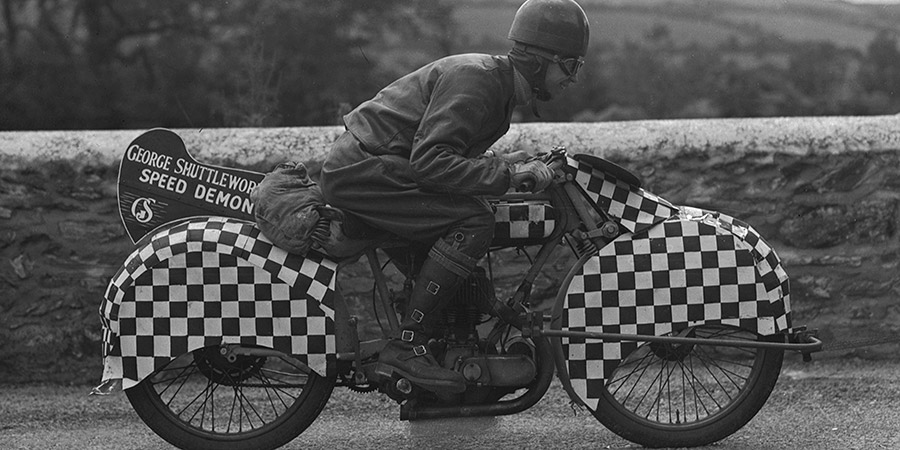 Early George Formby film and the first major movie to be shown on British television. A Lancashire lad with a home-built bike aspires to compete in the Isle of Man TT races

Lancashire sweep's assistant George Shuttleworth has long had a love of motorbikes and dreams of entering the prestigious Isle of Man TT race.

However, despite constant letters to a series of manufacturers, none (principally his favourite make, Rainbow) will take him seriously enough to even offer a trial, never mind join their team. Having built his own bike, a 'Shuttleworth Snap', he resolves to enter the race independently - and, with a little assistance from his mother, 'borrows' the requisite funds from his grandfather.

Unfortunately for George, his venture hits a snag as soon as he boards the ferry to the island and he's quickly lost every last penny. Befriending a fellow passenger, Florrie, she takes a shine to George's hapless ways and assists him to make back a little money in the meantime.

Soon enough, qualifying comes around and George sets off. He makes good progress, but when the brake lever on his home-engineered machine snaps off, it leaves the Lancashire lad unable to slow: he's terrified, but the 'Speed Demon' puts in a staggeringly quick lap time and becomes favourite to win the race proper - a real public cause célèbre!

It soon becomes apparent that George's problems have only just begun: the incident has put him off riding for life, and other competitors are keen to bribe him not to reconsider! Florrie, though, has all her hopes pinned on the his chances - little known to George, she is the Rainbow company secretary he has been in correspondence with, and has now recommended him to her managing director!

As the real race draws ever nearer and the other riders are keener to be assured George won't compete, events look to be coming to a head...