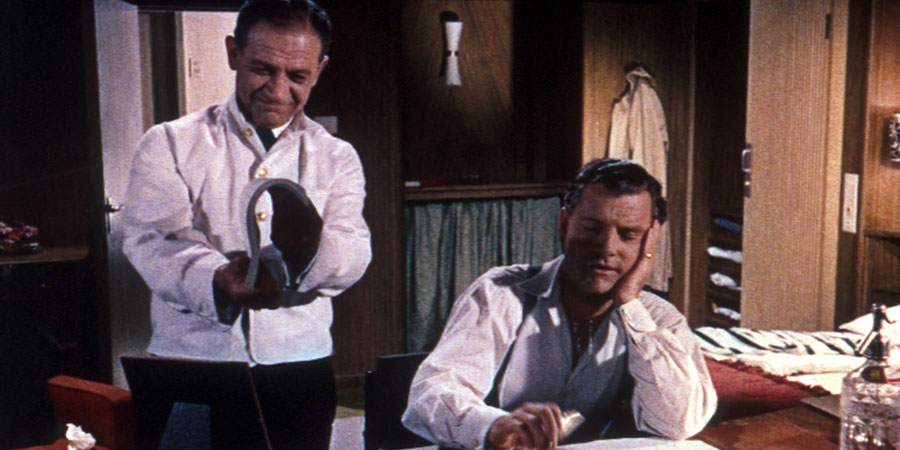 Next To No Time!

Planning Engineer David Webb, a back-room boffin, is brilliant behind a desk but shy and nervous with people and unfamiliar situations, and has devised an ingenious scheme for converting his employers' factory to automation and significantly increasing throughput.

His scheme, however, requires more capital than the firm can provide, and so he finds himself unexpectedly thrust aboard the liner Queen Elizabeth en route for America. He has the express purpose of tracking down famous industrialist Sir Godfrey Cowan to persuade him to finance the scheme before the ship reaches New York and he can sign a major deal with a rival company.

Aboard the world's greatest liner David's nerves are tested to the utmost. With a mixture of stage-fright, determination and the aid of lovely Georgia Brent, a distinguished American film star whom he meets on board, he pursues his famous quarry. But the great man is elusive and not easily approached.

After falling under the spell of Steve, a superstitious Irish barman; running the world-famous auction on the Queen Elizabeth's daily mileage; and performing a riotous solo dance in the ship's night-club, David is caught up in a series of midnight adventures, to the delight of all the passengers and the annoyance of Sir Godfrey.

Overnight, David becomes the ship's most illustrious and eccentric passenger. He manages to overcome his self-consciousness and eventually presents his scheme to Sir Godfrey Cowan. As the ship is about the drop anchor in New York harbour, David clinches his deal - just in time!