A new film based on Noël Coward's stage hit Blithe Spirit has been announced.

Dame Judi Dench, Downton Abbey star Dan Stevens and American actor Isla Fisher will take on the lead roles in the new "re-imagining" of the classic comedy, which is due to begin filming next month.

Previously adapted for the screen in 1945 under legendary director David Lean, the comedy follows successful crime novelist and widower Charles Condomine, who is struggling with writers' block whilst trying to pen his first screenplay.

Searching for inspiration, he and new wife Ruth take part in a séance and accidentally summon forth the late Elvira Condomine - who then continues to haunt the couple.

World distribution rights are currently on sale through Protagonist Pictures, with many key international territories already signed up. The film is being produced by Fred Films and Powder Keg Pictures in association with British Lion Films.

Trade website Screen Daily reports the script has been written by Piers Ashworth with Meg Leonard and Nick Moorcroft, who also produce.

Edward Hall is directing the new film, with Tuni Pinnolis, Peter Snell, Hilary Bevan Jones and James Spring also producing. It is expected to be in cinemas in 2020.

The 1945 adaptation also starred Rex Harrison, Constance Cummings and Kay Hammond, and won the Oscar for Best Effects in 1947. 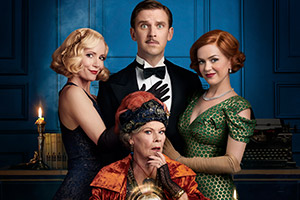