Simon Amstell is working on a new film titled Benjamin.

Few details are currently known about the project, although the project has been described as a comedy about "intimacy and despair".

The project, which has been written by and will be directed by Amstell, is being produced by new production company Open Palm Films. It will be filmed this summer.

Benjamin is one of a number of new projects announced by Open Palm Films. It is also working on Parade, a film about a man who has severe memory loss after a brutal attack; Pond Life, which tells the story of a group of friends on a fishing trip in 1994; and an adaption of the 1986 BBC series Dead Head, which focuses on a small-time crook who is framed for murder.

Dominic Dromgoole from Open Palm Films says: "With these new stories, Open Palm is delighted to celebrate the scope of the chamber epic, and the sharp edge of human truth. We are delighted to be working with a host of great storytellers, all interested in the stuff of life."

Simon Amstell's last project was Carnage, the pro-Vegan mockumentary film published last month on BBC iPlayer. The comedian is currently warming up material ahead of his forthcoming 2017 stand-up tour. 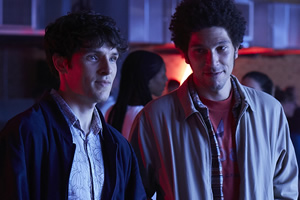