Principal photography has begun on new British comedy horror movie Fanged Up, with filming taking place on location in Portsmouth.

Fanged Up focuses on "lovable rogue" Jimmy Ragsdale. When he is thrown into Stokesville Prison for the weekend, little does he know that the inmates within have been hand-picked by the staff for their "consumption"... The Governor and his guards are actually blood-sucking vampires.

Daniel O'Reilly, best known for his controversial comedy character Dapper Laughs, has been signed up to play the lead role of Jimmy.

Fanged Up has been written by O'Reilly, Nick Nevern (The Hooligan Factory) and Dan Palmer (Freak Out).

Christian James (Stalled) is directing the film, with Terry Stone and Richard Turner (Nativity) as the Producers.

Stone and Turner say: "We are both really excited to have partnered together on this exciting comedy horror, which is squarely aimed at the 15 - 25 year old cinema going market. We're pleased to have cast an exciting mix of social influencers alongside some of Britain's best comedy and dramatic actors." 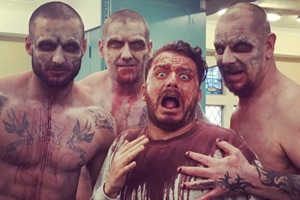