Filming will begin on Monday on a new film comedy, presenting a "fresh take on the traditional rom-com".

Lucy Punch and Faye Marsay will star in You, Me And Him, a comedy in which a lesbian couple - Olivia and Alex, neither of whom ever wanted children - both find themselves pregnant.

Producers explain: "You, Me And Him is a witty romantic comedy set in middle class England about two female lovers, one a career driven lawyer - Lucy Punch - and the other a fun loving, pot smoking layabout - Faye Marsay - and their annoying Casanova neighbour (David Tennant). While neither woman ever wanted children, both end up pregnant, creating conflicts that cause each to re-examine their outlook on life and their relationship."

Tennant plays John, who is father to one of the pair's children.

The film has been written and will be directed by Daisy Aitkens, who has previously written for kids' sitcom Shelfstackers, and appeared in sitcom Fear, Stress And Anger, and sketch show Watson & Oliver.

Writer/director Daisy Aitkens says: "I'm thrilled to be starting filming on You, Me And Him. We have incredibly funny and talented actors on board including Lucy Punch, Faye Marsay and the exceptional David Tennant. We're all looking forward to delivering a fresh, moving and funny take on the traditional rom-com."

Producers at Bad Penny Productions hope to see the film in cinemas for Christmas 2017.

Peter Davison was previously attached to the project but has had to withdraw due to scheduling commitments. 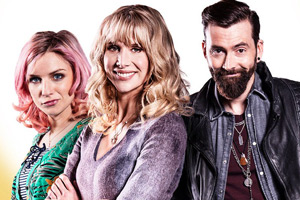 You, Me And Him