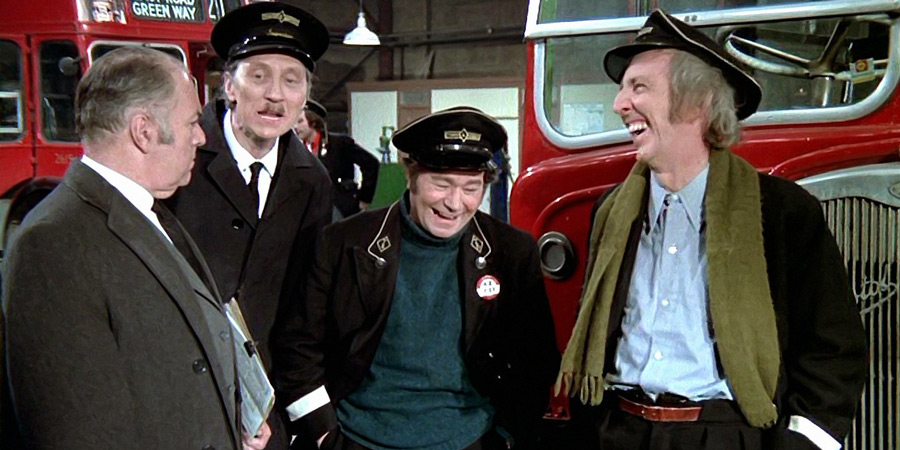 Mutiny On The Buses

Second spin-off from the popular sitcom. Stan wants to get married, but his family are not impressed by the idea

When Stan Butler agrees to marry Suzy he finds himself dealing with an unhappy mother, sister and brother-in-law. However, they are not worried about his future, or how his relationship will pan out. They are simply worried about the loss of Stan's money that will now be diverted to his and Suzy's new flat.

Problems begin to arise for Stan when Arthur is made redundant. In an attempt to help his family Stan delays the wedding. Meanwhile, Jack helps Stan to come up with a plan: perhaps Arthur can work on the buses, but first he needs to learn how to drive one

At the depot, the company have sent a new manager to whip operations into shape. With his foot firmly on Blakey's neck, the Inspector hits downwards harder than ever, and between the two of them, a new regime is introduced to threaten the busmens' liberties, including direct two-way radio contact with each bus. There'll be no more naps or nookie on working hours!

To everybody's surprise, Arthur successfully learns how to drive the bus and even gets a job. Other changes at the depot include the introduction of a Special Tours Bus to Windsor Safari Park, and Stan manages to secure himself the position of driver. But perhaps a trial run wasn't such a good idea...