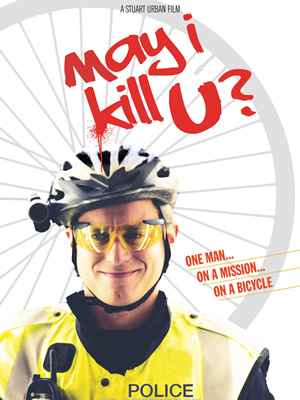 Kevin Bishop plays psychopathic policeman Baz Vartis in the new British comedy film May I Kill U?. Instead of arresting the criminals on his patch, Vartis starts killing them instead. Kevin explains more in this interview...

Hi Kevin. What attracted you to this role?

Not the money, that's for sure. We made this film on a low budget. Everything went on screen but it's a triumph really. Stuart Urban used all his many years of experience on this one. A lesser experienced director would have crumbled on day two of that gruelling schedule.

This film script had a huge appeal to me. It wasn't written in a fast pace information/story set-up/splurge. It took its time and played on the social awkwardness of all the characters. I thought the 'bobby on a push bike theme' was great and I could visualise that quite well.

I liked the idea of a psychopathic killer so convinced he was doing a good deed that he posts it on Twitter. I like playing nutters. They give me the freedom to stretch out and tap into the random side of my thinking. Normal people are blocked by convention, whereas mad people don't have that filter. They're fascinating to watch and great to parts to play if you're an actor, but you must commit.

When you were out and about filming did anyone mistake you for a real policeman?

Yes, lots. We filmed in some pretty rough estates and I'm sure the only reason we weren't robbed daily was because Hayley [Hayley-Marie Axe, who plays officer Stone] and I were always dressed as old bill.

How do you think real police officers will react to the film?

I personally think they'll love it - I would if I was a British copper. Our police are so disempowered these days. They get no respect from the public and probably fantasise about "bazzing" criminals regularly. I'm sure there will be a few that find it morally abhorrent but they probably work in the office. I'm only joking. It's never right to kill members of the public... unless they're playing music loudly or eating a kebab on public transport. 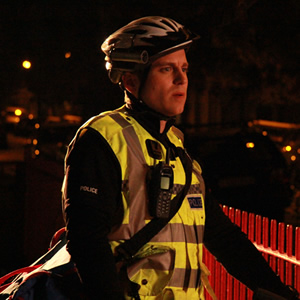 Ha ha. Away from the film, have you ever had a brush with the law in real life?

I've never had a brush with the law. I generally don't break many rules but I'm terrified of the police. Every time I see a police car I freeze.

What projects are you working on next?

I'm currently filming in LA with Rebel Wilson (Bridesmaids, Pitch Perfect). It's a new sitcom pilot called Super Fun Night. I play Richard, an English Lawyer who gets close to Kimmie (Rebel). It's the male lead role so it's quite a daunting thing. Working over here [in America] in comedy makes you feel less important. The standard is very high and everyone is super professional. No more late nights for me.

Wow. That sounds great. Best of luck in getting a series of that. Aside from this American sitcom, you seem to be doing a lot of films now, less TV - is that a conscious decision, or just a coincidence?

I really enjoyed making Star Stories and The Kevin Bishop Show. They gave me such creative freedom. That stuff exploded out of me in those shows because I'd been bottling it up for years whilst acting in dramas. However, film is the reason I became an actor. I love films and the arc of a story and character is very important to me. Characters is what I do, so I need time and history to add the layers to them. Sketches don't allow that luxury so your character is always half baked. I love TV comedy but I didn't want to get stuck in sketch comedy forever. I don't have anything funny to write sketches about anymore anyway because I used it all up on my show.

Thanks for your time Kevin.