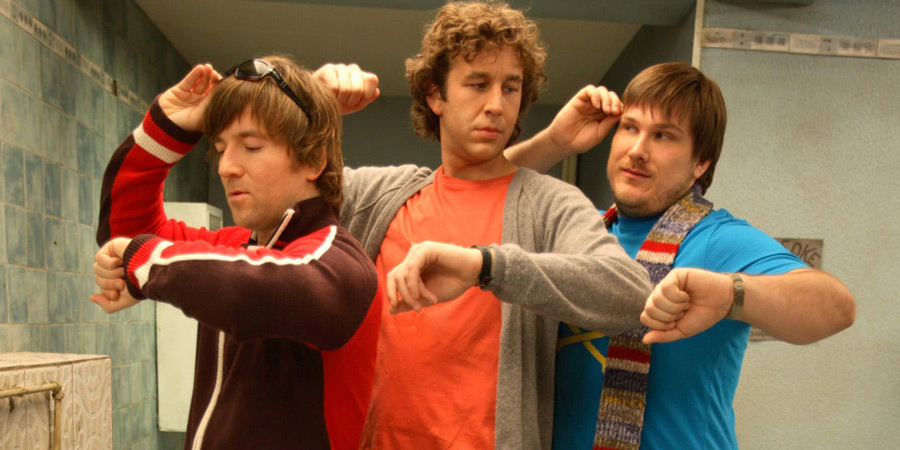 Three men walk into a bar: two geeks and a cynic.

They are three ordinary blokes who all have dreams and hopes for an exciting and better future. They are stuck in boring jobs with no prospects. They are frustrated and life on the whole looks uneventful.

They are about to sit down and have an average night out in their local pub, a few beers, a bit of banter and joking, and putting the world to rights. There is no reason to suspect anything unusual is going to happen.

The first geek, Ray, has a well-known obsession with time travel, so when he is approached by Cassie, a woman who claims to be from the future, he naturally suspects a prank.

The second geek, Toby, is obsessed with films, and upon hearing Rays story of the woman from the future, naturally assumes that Ray is pitching him a film plot. And Pete, the cynic, naturally doesnt believe any of it, until he accidentally stumbles through a time leak into the future of the bar. Which happens to be full of dead people, including himself.

This triggers the start of a series of accidental trips back and forth through time, during which our heroes frantically try to avoid multiple earlier versions of themselves, to avoid creating a time paradox, in an attempt to unravel the mystery of just who is trying to kill them and why.

When Ray and Cassie get together in the garden and the world spins back on its axis, everything is back to how it should be. Or is it? When Ray mentions the other woman he met in the bar, Millie, to Cassie all hell breaks loose... Serious questions are raised, such as; exactly what are the golden rules of time travel? What exactly is a paradox? And whats really so bad about ceasing to exist? Whose round is it? Is the sell-by date on a packet of crisps really that important? And most importantly of all, can Ray get it on with Cassie, the woman from the future?