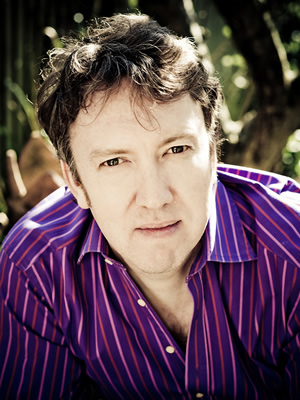 Richard Lumsden is one of the stars of Downhill, a comedy film about four old school friends who decide to have a go at Wainwright's Coast to Coast Walk.

Hi Richard. Thanks for your time. Your CV is packed with comedy credits. How did you first get involved in comedy acting?

You're welcome, BCG. Thanks for asking.

Weirdly I never set out to get involved with comedy acting. My mantra has always been 'play your comedy straight and your drama for laughs'. But I love working in comedy because I think it often deals with the full range of emotions better than drama does, which tends to stay somewhat po-faced all the time. When was the last time you heard someone crack a really good gag in Holby?

The Americans usually get this balance better; The West Wing, Breaking Bad, Nurse Jackie all make you laugh one minute and break your heart the next.

But to answer your question; I left drama school in '86 and my first TV show was playing Foggy Dewhurst in First Of The Summer Wine - a prequel to the long-running Last Of... series.

Looking back over the shows and films you've done so far, do you have any favourites?

Downhill ticked every box for me; I really loved every minute shooting that film.

Going back in time, others would include Wonderful You - a comedy drama series I wrote for ITV with my mate Chris Niel; Sugar Rush on Channel 4, which won an Emmy; and Simon Nye's solicitors sitcom Is It Legal?.

We adored Is It Legal?, but it's been somewhat forgotten about now. It's a shame it's not repeated more?

You clearly have impeccable taste! Simon Nye's scripts were mouth-wateringly good and it felt like the whole cast belonged in the same world; always the sign of a good comedy. My character Colin Lotus was a delightfully naive idiot who could never quite believe he wasn't going to feature in a John Grisham novel. 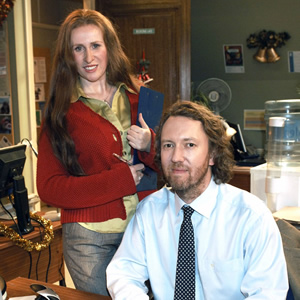 The BFI screened an episode of it last year and it still makes me laugh. It's a shame it didn't run on the BBC as I think it was a classic comedy in the making, but we got three very good years out of it and it's one of those shows that still evokes a warm and passionate response from the twenty nine people who saw it.

One of your most high profile comedy jobs must have been acting on The Catherine Tate Show...

That was one of those shows that really landed and I loved working with Catherine.

At its height there were a few months where blokes would lean out of vans at traffic lights shouting "Mornin' Martin, I'll tell ya worrit is" as I walked my kids to school.

So Downhill is now available to stream and is coming out on DVD. Could we ask you to explain the premise?

Downhill is a British road movie on foot, about four old school friends who reunite to walk 192 miles coast to coast across the UK. Along the way they realise their lives are perhaps not as sorted as they hoped. My character, Gordon, organises the trip and brings his 19 year-old son along to record the journey as his film school project. It's a bittersweet comedy about friendship and life passing by.

It's the first feature by award-winning commercials director James Rouse and won't be the last. James has a frighteningly astute understanding of the human condition combined with a devilish sense of humour. I've taken out a loyalty card that he can stamp when we work together again... four more performances, he gets the fifth one free. I'm a little bitter he makes a slightly better lasagne than I do, but don't tell him that. 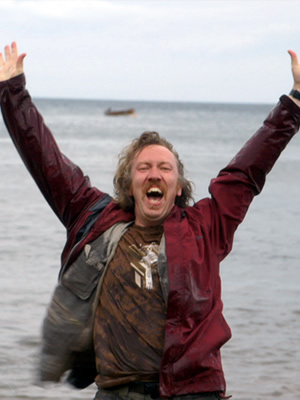 Your co-stars are Karl Theobald, Jeremy Swift and Ned Dennehy. Did you know them before filming? If not, presumably you do now?

None of us really knew each other before we started on the film, although Jez and I remember bumping into each other over twenty years ago when we were young pretty starlets tearing up the town.

One of the things I'm really proud of in the film is that we look like a bunch of old mates who went to school together and really get on each other nerves...

And, yes, we're all extremely intimate now. It can be like that after a movie. We all shared underwear and our body cycles aligned for the length of the shoot. We became particularly close over those few heady weeks of filming but made a pact: what happens on location stays on location. I can't say any more than that!

The last comedy movie you appeared in - Sightseers - saw your character killed whilst hiking. No chance of that in Downhill?

When Sightseers came out after shooting Downhill, Ned said that's what they all should have done to Gordon... it was a particularly gruesome death.

I'm now hoping to corner the Hollywood market in slightly eccentric but well-meaning British ramblers with something missing from their lives. In Downhill it's his career, money and absent father... In Sightseers: his face.

Shooting Downhill was an absolute blast. The project had me at hello as soon as I heard about it; we had three weeks to rehearse the back stories, a very small film unit, long treks carrying rucksacks of damp clothes up a hill for two hours to find the right spot, no make-up, filming in whatever weather was thrown at us (usually rain as we shot it in the wettest June on record in 2012)... But I actually feel very comfortable in that environment and I'm really proud of the film.

I've sneaked in to a couple of cinemas around the country while promoting it and it's been a pleasure to hear the audience's reaction. They've really taken to it. 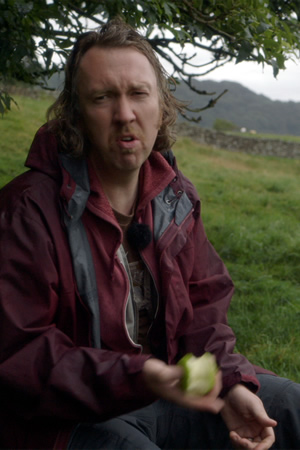 Are you a countryside/hiking person in real life then Richard?

I'm from the Peak District in Derbyshire and my youthful recreation was putting on hiking boots and walking across the moors. I regularly take my boys up there to get my regular fix of the hills. They are both urban teenagers and say it's a form of kidnapping, being forcibly removed from loitering in skate parks and contemplating which hoodie to wear, just to be made to walk up a hill for no reason and fed a massive platter of steak pie and chips in some Northern pub surrounded by fields. I know they love it really.

The film has been well received, with got good scores on ratings websites like IMDb and Rotten Tomatoes. You must be pleased? Is there scope for a sequel?

It's a truly independent British movie, lovingly hand-made by a very small number of people. It's very gratifying to see it touch a nerve with audiences and critics. But like any other indie there's no marketing budget for ads on buses or the back pages of Sunday papers, so we're pretty much reliant on word of mouth.

Our audiences have really got behind it and it's thanks to them them the word is spreading, for which we're very grateful.

As for a sequel, how many did Police Academy get? I think we can go at least two better than Star Wars.

What's up for you next Richard?

I worked on a film - Heart Of Lightness - in the Arctic Circle in Norway last year, about a group of actors who go to Norway to film Ibsen's Lady From The Sea in the land of the midnight sun, and all go slightly unhinged in the process.

I persuaded the rest of the cast and crew to go for a group dip in the Arctic every morning before work - we formed the Salty Swim Club (Lofoten Division).

I'm looking forward to seeing the movie, mainly because I expect we'll all look like frozen prunes throughout. It's just opened in over 100 cinemas in Norway and I'm hoping it comes here soon.

I did some work on a BBC TV thriller called Remember Me earlier this year and am currently writing my fifth play for Radio 4, A Book By Lester Tricklebank: it's a verse drama about a man who can't read or write but is attempting to document his life story. It's got blockbuster written all over it!

Oh, and it'll also be our tenth year doing the hit Radio 4 comedy series Clare In The Community.

Thanks for your time Richard. It's been a pleasure to talk to you.

Thank you BCG for giving Downhill a nudge. Hope you enjoy the film.

Downhill is available on DVD and digital platforms now. To find out more visit downhill-the-movie.com