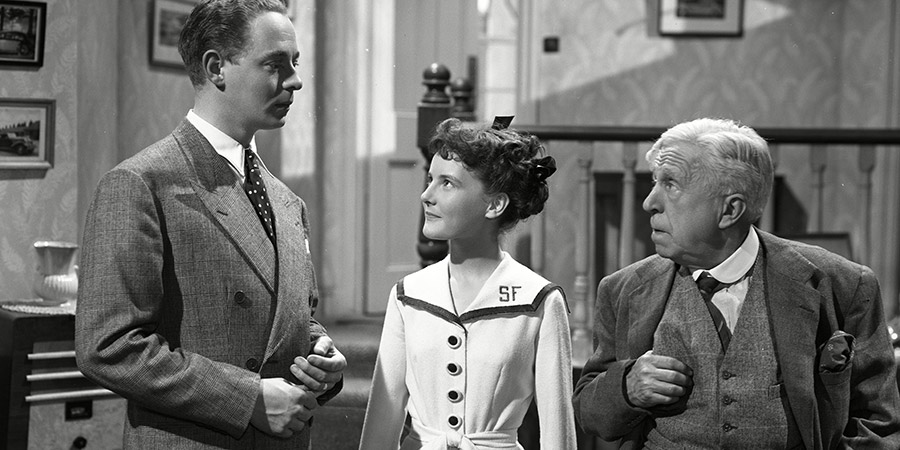 Don't Ever Leave Me

An ageing petty criminal gets his grandson into hot water when he kidnaps a 16-year-old girl who's only too keen to be ransomed!

Fresh out of a fortnight in HMP Wandsworth, ageing petty criminal and conman Harry Denton is quick to impose himself upon his straight, hard-working grandson Jack once more. A chance encounter with a much younger criminal acquaintance sees Denton feeling his age, however, and determined to prove - to himself, if no one else - that he's not lost it.

His friend's jibes and an overheard conversation on a bus soon give Harry an idea: kidnap. Specifically, the kidnap and ransom of Sheila, the only daughter of one of the country's most well-paid actors, Michael Farlaine.

Giving little further consideration to the plot, Harry enacts his plan, stealing Farlaine's car from the stage door of a West End theatre and tricking Sheila into accompanying him, as chauffeur, to visit her father at work. As they travel through London, the 16-year-old quickly cottons on that something isn't right, and deduces the entirety of Harry's plan; however, her wit and age bring about a sudden realisation in the old man that this particular scheme is far out of his usual petty depth.

Sheila, however, could not be more delighted. Instinctively sensing Harry's ultimately kind nature, and thrilled by the prospect of an adventure, she turns blackmailer and forces him to continue with the ruse! Mollycoddled and babied by her father, who all-too-often ignores her and certainly has no truck with her desire to follow his footsteps into the limelight, she hopes this might force him to pay her some attention - even if at an enforced distance!

When the pair arrive back at Jack's flat, Sheila eagerly plays into the caper by phoning in her own £2,000 ransom demand, embarking on disguising herself for trips out; and when Jack himself returns home, she's sure she's found love, too!